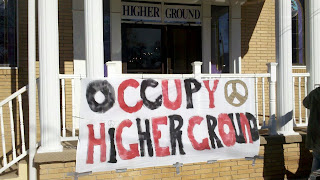 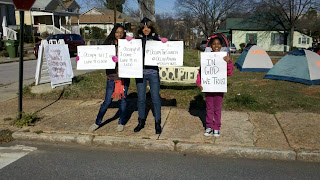 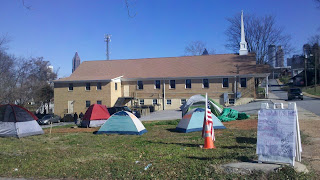 Higher Ground Empowerment Center(HGEC) is a neighborhood church in the heart of Atlanta’s Vine City. For the past 108 years, Higher Ground Empowerment Center has been a pillar in the historic Vine City community, one of Atlanta’s most under-resourced communities. HGEC has offered an array of much-needed programs and services including free healthcare screenings, a food pantry, job fairs, an annual Vine City Thanksgiving dinner, Karate classes for youth, Saturday tutorials, and summer camps for students.


In 2008, the church suffered a major blow in the form of a disastrous tornado that ripped apart the property. In order to rebuild, the church was forced to take out a loan, one that became increasingly difficult to pay back and unrepresentative of the resale opportunities as donations and property values fell during the recession. The church repeatedly attempted to refinance the loan to be more representative of the property’s value, but BB&T, a company whose CEO, Kelly King, claims that their “foreclosure process is a values based approach where [they] work with our clients,” has not responded. The cruel irony is that BB&T bank spends about $5 million dollars a year on teaching positions and research on what they refer to as “the moral foundations of capitalism.” We find these morals and values suspiciously absent when the opportunity to profit off of the very people who bailed out BB&T to the tune of $3.1 billion comes about.

The day before the HGEC was to face BB&T in court over their right to stay in the meeting, Pastor Dexter Johnson reached out to Occupy Atlanta for help. After Occupy Atlanta set up tents and held a press conference,BB&T began back peddling, falsely claiming that they never intended to evict the church, and that they were willing to work out a deal. The deal BB&T wants to work out is unacceptable. BB&T now says that HGEC must lease the property from the bank.

HGEC, Occupy Atlanta, Vine city community members, and other social justice organizations including Ranbow PUSH Coaltion, and American Friends Service Committee, are committed to fight for HGEC's right to own the church they have called home for 108 years.This coalition has also been joined by Rebuild the Dream, an organization that started a national online petition that has gathered tens of thousands of signatures.


Occupy Atlanta has organized a rally to save the church this Tuesday, January 17th, at 9:30am at the Church(561 Spencer st, Atlanta).The rally is important because HGEC and Occupy Atlanta are set to meet with BB&T at 11am and the pressure needs to be on. American Friends Service Committee will be present, and we hope you will be too!

I must also say that Vine City is the most underserved community in the downtown area. While I canvassed the neighborhood I shot some footage. It's truly the shame of Atlanta, and a clear consequence of extreme wealth consolidation. Let the fight for HGEC be the beginning of the fight to improve deplorable conditions in Vine City.