RALLY TO SAVE 108 YR OLD CHURCH FROM BB&T BANK 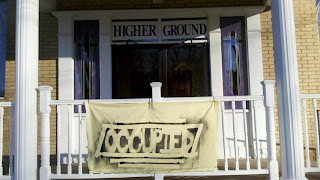 Tomorrow(1/17/12) at 9:30am we will be holding a press conference and rally to save Higher Ground Empowerment Center(HGEC). The time and date is significant because the bank is set to negotiate with HGEC, Occupy Atlanta,and Rainbow PUSH, at 11am. Last week Occupy Atlanta was able to help the Church put off immediate eviction from the building they've called home for over 108 years. Despite false claims from BB&T lawyers and executives, it seems clear that the bank does not plan and working out a deal that would give ownership back to the Vine city church. BB&T has also been openly dishonest with the public, claiming that they never intended to evict HGEC, we know this to be sadly false.

It is time that BB&T live up to their "Values based approach" to dealing with foreclosures and make a deal with HGEC with gives ownership to the church, time for BB&T to do the right thing.

Occupy Atlanta will also be delivering a petition, which was organized by Rebuild the Dream, to save the Church to BB&T tomorrow. There are over 60,000 signatures from people all over the country.

The fight to save HGEC from BB&T bank isn't just about saving a church, it's about saving a devastated community. Vine City is the most undeserved community in the downtown area.There are parts of the City that resemble post Katrina New Orleans. Tomorrow after our press conference members of the HGEC, the Vine City community, and Occupy Atlanta will begin the process of fixing up Vine City. It's clear that we can no longer wait around for the Mayor to wave a magic wand, if there is to be change, it's going to have to come from everyday people in the community, it's going to have to come from the 99%. In this spirit we will be picking up some of the overwhelming amount of trash around the neighborhood.We also plan on launching an effort to get signatures on a petition to save Bathune Elementary School, which is within eye-shot of HGEC, and is under threat of being shut down.

Joining us for the press conference tomorrow will be Dr. Joseph Lowery from the Peoples Agenda, Joe Beasly from Rainbow PUSH, Talk Radio Host Rob Redding,American Friends Service Committee and many other community leaders and stake holders, and organizations.