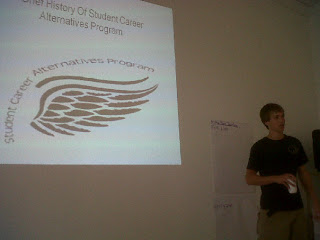 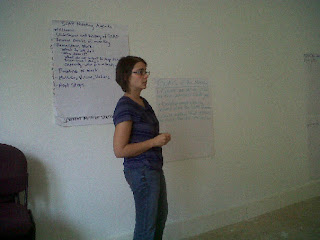 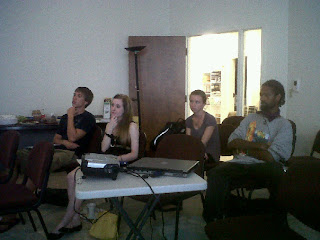 On Wednesday July 29th Student Career Alternatives Program(SCAP) had a had a meeting to develop a 2010/2011 action plan and timeline. We started with a brief history of the organizations past actions and accomplishments which included leading a campaign to close a publicly funded marine corps themed high school before it opened, having a presence at numerous high school career days, providing workshops and info sharing sessions to high school students, facilitating a city wide art contest, and playing an important role in introducing several pieces of legislation in the Georgia Senate and the House in the 2010 session.

Christina Repoley took on the task of facilitating the meeting, keeping us focused while creating a space where every voice was heard, every idea expressed.

It seems that the group believes that last years efforts were worth while and should be continued. There will be another "Love Bombs" party October 9th at the 5-Spot. There will be another, "It's My Life" art contest in the spring of 2011. We will work with the ACLU and Georgia law makers to introduce a new Bill that would mandate a standardized Opt Out system, and we will continue to try to expand the number of metro Atlanta schools we have a presence at.

There were a few areas of growth that were identified. Several folks expressed feeling like it somewhat difficult to navigate what SCAP is and how to get involved. Some suggested that this may be what's behind our capacity issues. It was suggested that we explore systematizing the process in which one becomes involved with SCAP and that we hold monthly trainings during the time that school starts on how to table at high schools, and how to provide career counseling.

The group also wanted to have a stronger presence in the community, specifically youth venues and events. Below I've included a video of the notes that were taken by Christina for those interested. I think SCAP is a program to keep an eye on in the next 12 months, we're on the move and there's plenty of room for you to join us!

SCAP is a project of the American Friends Service Committee and meets every Wednesday at the AFSC Atlanta headquarters at 60 walton street. The meeting are open.
For more info on SCAP visit: