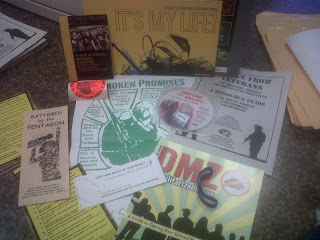 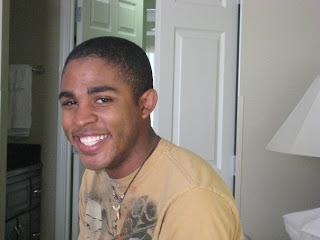 Adam Barnett came to the last two “Be The Change” Youth Convergences hosted by the American Friends Service Committee and the Georgia Peace & Justice Coalition. In the last few years we’ve all watched Adam develop a passion for working to develop a more just community. Adam was particularly inspired by Oskar Castro’s(AFSC National Youth & Militarism Staff) workshop on youth and militarism at this year’s “Be The Change”.

Adam decided that it’s time to organize folks in La Grange Georgia to challenge the militarization of youth culture and the recruitment of his peers into the military. Adam worked with local activist, and founder of Alterna Community, Anton Flores to host an initial strategy session to explore first steps for build a Truth in Military Recruitment movement that would not only provide young people with information about the realities of military service and benefits, but also provide young people with realistic non-military post high school options.

One concern that was articulated in our session was that military recruiters have all the access they want o high school campuses and they come across as career counselors, people that are there to help pave the way to a brighter future. This is particularly disturbing when one looks at the statistical realities of modern veterans. Modern vets have an extremely high suicide rate, they earn 15% less then non-veteran counterparts, 1/3 of female veterans report sexual assault while on duty, less then 12% of veterans find that their military experience translates into a civilian job,1/3 of homeless people are veterans, and coverage for PTSD is being denied left and right.

At one point Adam expressed feeling frustrated that more people from his community didn’t show up for our session, I was of course not that surprised , as I’ve seen/experienced how hard it can be to organize conservative strongholds like La Grange. Interestingly, as I was on my way back to Atlanta I decided to stop for a coffee to go. S I ordered my coffee I recognized another Be The Changer. Him and his co-worker both said that they had wanted to come to Adam’s session but were unable to due to work. I was able to take a moment to give each of them an organizing packet that was given out at the meeting and summarize what we had covered, small world!