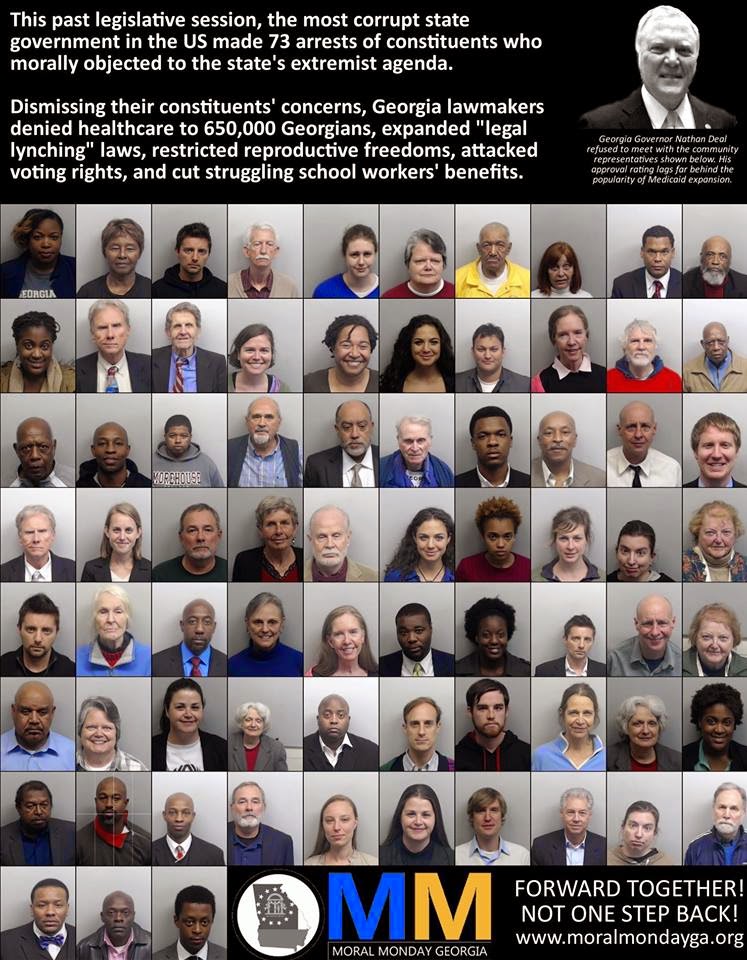 The Moral Monday Georgia Coalition, the NAACP-led multi-racial, multi-issue advocacy group, will be hosting an event in partnership with HistoricEbenezer Church, American Friends Service Committee and others at EbenezerBaptist Church, 407 Auburn Avenue on Monday July 28th at6:30pm. This event is part of the Jail for Justice Tour, a state-wide, 16 city tour hosting daily events across Georgia from July 28 through August 12th. These events are intended to bring the group’s message from the capitol to the rest of the state. Each stop will feature a different line-up of three-five Moral Monday GA arrestees who will discuss their choice to go to jail in the pursuit of social justice.

The tour aims to bring together Georgians across the state to plant seeds for local actions, register voters, and coalition building during the approaching 2014 election and upcoming legislative session. Rev. Dr. Francys Johnson, NAACP president and Moral Monday arrestee, states, “For far too long, we have let our elected officials ignore the moral implications of their actions and inactions in regards to the most vulnerable among us. It is time to move Georgia forward.”

Modeled on the North Carolina NAACP's Forward Together Movement led by Rev. William Barber, Moral Monday Georgia is broad based coalition of churches, mosques, labor unions, teacher’s organizations and progressive groups. Moral Monday GA is a continuation of North Carolina’s movement to shift Southern politics toward a moral center where civil and human rights are protected and advanced.

During the 2014 Georgia legislative session, Moral Monday brought a national spotlight on the repressive laws being passed by the General Assembly. The movement drew attention to issues from Medicaid expansion and Stand Your Ground laws to reproductive justice and workers’ rights through a series of dynamic actions, including rallies and voter registration as well as mass civil disobedience. The arrestees—72 over the course of the session--came from all generations, backgrounds, races and religions. Elected officials and prominent faith leaders also participated in civil disobedience, acting as moral witnesses against the corrupt actions of the current administration.
American Friends Service Committee is really excited to be one of the conveners of the Moral Monday Movement in Georgia and we plan to continue to put effort and resources into building the movement that places priority on:
Secure pro-labor, anti-poverty policies that ensure economic sustainability
Provide a well-funded, quality public education for all
Promote healthcare access and environmental sustainability
Address continued inequalities in the criminal justice system
Protect and expand voting rights for all
For a list of all the tour stops click here.