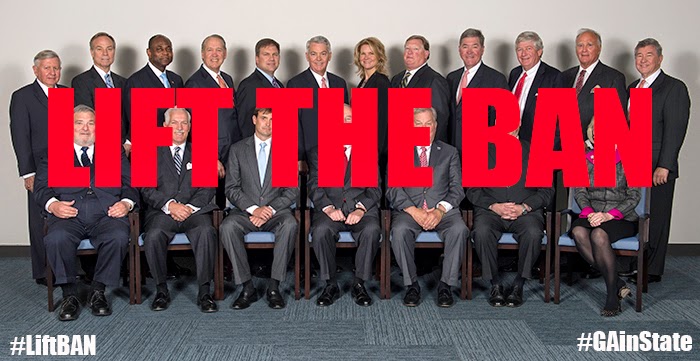 “Georgia Board of Regents is violating its own policy in order to discriminate.” A coalition of Georgia organizations is protesting against the segregation that comes as a result.

Tomorrow, Tuesday 5/20, the Georgia Dreamers Alliance, along with a Coalition of Organizations including American Friends Service Committee and Moral Monday Georgia, will urge the University System of Georgia Board of Regents to rescind Policies 4.1.6 & 4.3.4. Policy 4.1.6 effectively bans undocumented students from applying to and enrolling in the state’s five most competitive public institutions. Policy 4.3.4 denies students with Deferred Action of In-state Tuition rates at all Public institutions in the state. The Georgia Dreamers Alliance will hold a rally to protest the Board of Regents denial of in-state tuition and access to the top 5 College & Universities to students who have gained legal presence under the Deferred Action for Childhood Arrivals (DACA) program.

The Board of Regents meets tomorrow at the University system of Georgia building, 270 Washington Street, SW Atlanta, GA 30334. The demonstration is set to begin at 10am in front of the building, click here to link to Facebookevent.

According to the Board of Regents Policy manual 4.3.4, a student must have "legal presence" in the country in order to be eligible for in-state tuition. It reads: “Each University System institution shall verify the lawful presence in the United States of every successfully admitted person applying for resident tuition status.” Through the DACA program, undocumented students have been granted "legal presence" while deferred action is in effect. Nonetheless, the Board of Regents has decided to subject thousands of Georgia students to this blatant form of discrimination.

Students with Deferred Action who have sued the Board of Regents say their lives are on hold. An Obama administration order allows them to remain in the country with lawful presence. But the University System of Georgia still bars them from Georgia’s top colleges, and denies them in-state tuition rates. We demand the B.O.R to abide by their policy manual. Students with deferred action are no longer undocumented, leaving no legal basis for this form of discrimination.

“I have been recognized by my high school for my academic achievements and my parents are Georgia taxpayers and members of our church. All I want is for my application to be considered on the basis of merit and academic achievement, not immigration status. After all, I am a Georgian.” – Said Valentina Garcia, a Georgia student who has received legal presence through the DACA program

“The University of Georgia recruited me in the summer of 2010. I spent an entire week at their facilities, and while there, they said I was the perfect student, that they would love to have me, and that they could see me crossing the Arch, leaving a trail of achievements behind. It was then that the University of Georgia became my dream university. As a result of anti-immigrant laws I was left alone in this country, and I overcame homelessness and ended up living with a pastor from church who helped me finish my senior year in high school. I became student body president of one of the largest high schools in Georgia and I was honored by the National Society of High School Scholars and won countless other awards for my work and leadership. At my graduation ceremony, I sat on stage next to the principal and valedictorian. When I was finally applying to college, I could not apply to the University of Georgia, and it was then that I realized that I was undocumented. Policy 4.1.6. Shattered my dreams. I am calling on the Board of Regents to lift the ban and let me attend my dream university.” – Stated Eduardo Samaniego, organizer for the Georgia Dreamers Alliance

“I have been living in Georgia my entire life and every morning I pledge allegiance to the United States flag. I am an American and I am a Georgian. I want to be able to reach as high as any of my classmates. I have a 4.0 G.P.A. and my hometown is Athens, Georgia; I want to continue my education in the place I call home. I live in the University of Georgia’s backyard, yet I cannot even apply for admission. I hope this is the year that the Board of Regents eliminates policy 4.1.6.” - Diana Umana

The Board of Regents’ ban is in flagrant violation of longstanding human rights principles expressed in the Universal Declaration of Human Rights (UDHR). By shifting the basis for access to higher education away from individual capability to immigration status, the Georgia Board or Regents is violating customary international human rights norms. By limiting undocumented immigrants’ access to higher education, the ban also violates Article 25(1) and Article 26(2) of the UDHR. While the University of Georgia is celebrating fifty years of desegregation, thousands of young people who consider themselves Georgians at heart await to attend this university.

This coalition is formed as the State of Georgia grows weary of its own history. On Wednesday, May 21st at 10:30am of 2014, the coalition will remember the Anniversary of 50 years of university desegregation when African American students were first allowed to attend these top institutions. Community leaders will come to speak in behalf of the African American community, whose struggle was not much different as they were also banned from the same top five universities in the state of Georgia simply for the color of their skin.

By foreclosing the opportunity to attend these prestigious universities, the Board of Regents ban disincentives hard work and academic achievement. The Board of Regents is essentially taking us back in history, when African American students were not allowed to even apply to these universities. The ban repeats to undocumented students what once was said to African America students, that no matter how much they strive for improvement, they are incapable of ascending the socio-economic ladder and creating a more prosperous future for themselves and their families; this essentially creates a population of second-class citizens or as many would call it, a new era of segregation.
Posted by Atlanta Economic Justice Program/AFSC at 5:41 PM