American Friends Service Committee is excited to announce that we will be working with the Moral Monday Georgia movement to organize a statewide tour called, "Jail For Justice".

Can you help host "Jail for Justice' tour in your community between July 28th and August 11th?

What is the 'Jailed for Justice' tour? 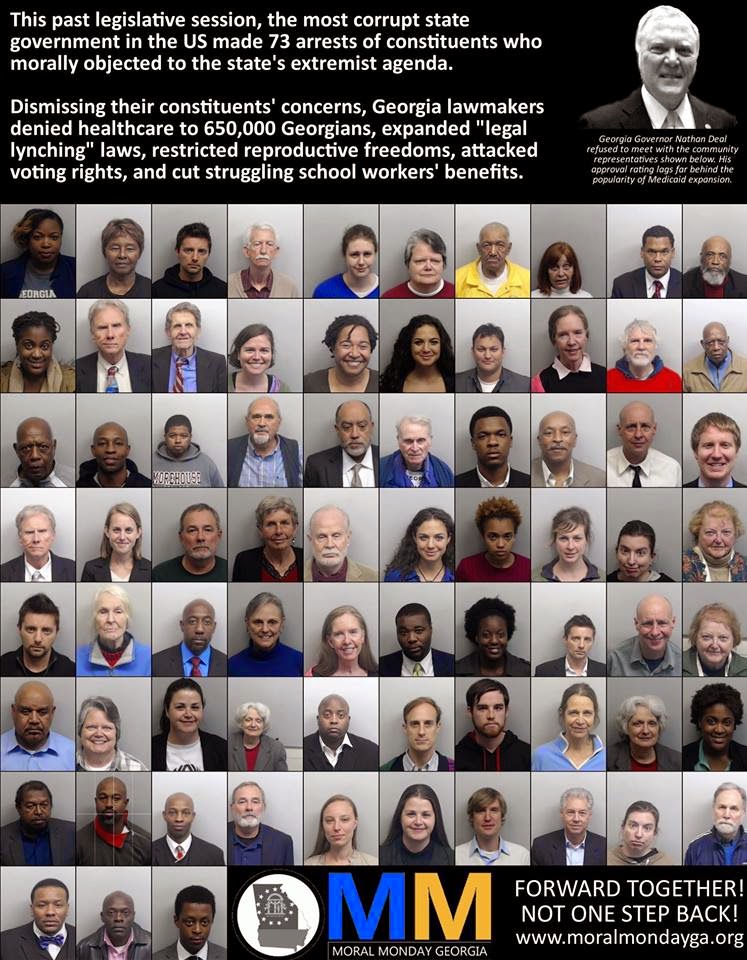 Over the course of the 2014 Georgia legislative session Moral Monday brought a national spotlight on what many have called the worst session in a generation. Moral Monday was able to create real dialogue about Medicaid expansion, Stand Your Ground law, a woman's right to choose, workers' rights, and other important issue through a series of dynamic actions that included mass civil disobedience.

Over the course of the year there were 81 arrests. Arrestees were young, old, white, black, brown, gay, straight and everything between. Elected officials and prominent faith leaders also participated in civil disobedience with the intention of bringing attention to the attack on poor people.

The, "Jailed for Justice" tour will feature a diverse group of 3-5 Moral Monday  arrestees who will talk about why they choose to put their freedom on the line for their beliefs and what their hopes and dreams for the movement are as we count down to November's election and look forward to the 2015 legislative session.

Each tour stop may include a different line-up of Arrestees.

What are some of the Goals for the, "Jailed for Justice" tour?

*We hope to bring the message of the Moral Monday Georgia movement across the state.

*We hope to create space to hear about the issues Georgian's are most concerned about and foster discussion about how we might work together to create the change we want to see.

*We plan to do voter registration at every stop!

*We plan to organize a meeting with community/faith leaders after each tour stop.

*We hope to begin the hard work of building the statewide movement Georgia needs to change the political landscape.

Please email tfranzen@afsc.org or jrodriguez@afsc.org if you are interested in hosting a stop on the tour!

Forward Together!
Posted by Atlanta Economic Justice Program/AFSC at 5:05 PM