IBM and a Life or Death Situation 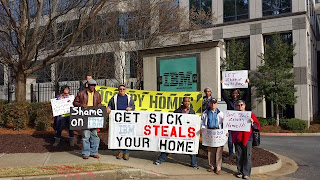 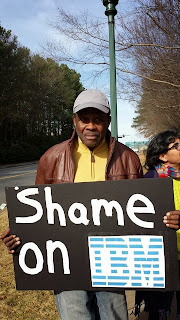 Zannie Jackson is in a life or death situation. Having lost use of both kidneys, he must undergo dialysis treatment four times a week. As he waits for a matching kidney that may never come, Zannie must also deal with his home being in foreclosure. Strengthened by his love for his 12-year-old son, he refuses to give up on his dual fight against his potentially fatal illness and an impending foreclosure.

Today, Zannie and over a dozen supporters delivered a petition signed by over 900 people to IBM --- the company owns Seterus, who is the loan servicer trying to foreclose on Zannie's home. It was a surprise to discover that IBM was getting into the mortgage business, less of a surprise that they are choosing to do it by branding a no name corporation to do their bidding. After IBM received the petition we held a demonstration outside IBM to make it clear that this would not go away. CBS cover the story on their 5 and 6pm newscasts. 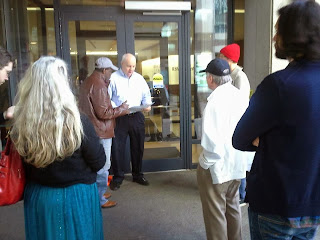 ‘Tis the season for giving and it is our hope that Seterus will negotiate a deal with Zannie that works with his disability income. Bank of America has already released him from his second mortgage; now it’s IBM’s turn to do the right thing. 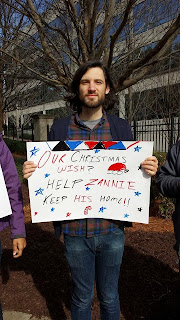 The reality here is that if IBM owned Seterus modified Zannie's loan based on the real calue of the home it could be a victory for Zannie and IBM's Seterus. Zannie would be able to afford his payments, and Seterus would pull a profit and put an end to a public pressure campaign that's sure to escalate. American Friends Service Committee is excited to support Zannies campaign, which is being led by Occupy Our Homes Atlanta.