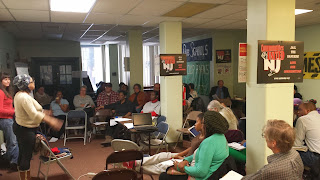 Today marked day one of the third Housing Justice Academy and like the first two, it seems to be a success so far. In Newark NJ over 50 resident fighters and allies came out to learn how to organizer home defense campaigns using public pressure and direct action. 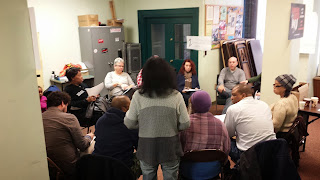 Newark was hit hard by the housing crisis leaving many communities littered with bank owned vacants and thousands owing mush more then their properties are worth. Like many states big bank settlements(hardest hit funds) are not trickling down to the hardest hit in New Jersey, instead being used by the state's Governor to balance the general budget. 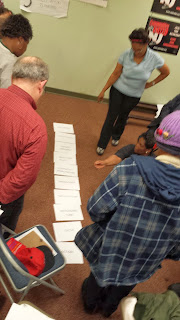 Just one day into the Academy and residents are already planning out their first campaigns and strategies about what it would take to organize multiple eviction free zones. In Irvington, the city next to Newark, the mayor and members of city counsel have announced their intention to pursue eminent domain as a strategy to reclaim homes from multiple banks, bringing immediate relief to struggling home owners.

Lots to be excited about in New Jersey!
Posted by Atlanta Economic Justice Program/AFSC at 9:53 PM