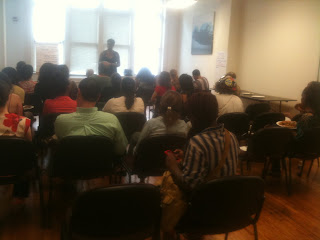 On July 1st, 2013, the Solutions Not PunishmentsCoalition (SNaPCo) convened a group of stakeholders for a “Coalition and Community Meeting” to discuss an alternative proposal to address street-level prostitution/sex work in Atlanta.

This progressive proposal and community meeting came after SNaPCo and a wide range of diverse groups came together to stop the medieval “banishment ordinance” in February of this year. The Atlanta City Council and Mayor Kasim Reed attempted to pass this inhumane, ineffective ordinance without any input from those most directly affected, or from those most connected to those affected. This ordinance would have further punished alleged street-level sex workers by banishing them from certain areas or the whole city, even if they live in that area where they work.

Street-level sex workers already face a disproportionate amount of violence, abuse, and other struggles. Street-level sex workers have mortality rates 200 times those of other women of similar age and race. They are 18 times more likely to be murdered than their counterparts and have a workplace homicide rate 51 times higher than the second most dangerous profession, liquor store clerks. About 75% meet criteria for Post-Traumatic Stress Disorder (PTSD), 46% have attempted suicide, and one in five has had a police officer demand sex acts from them in exchange for not being arrested. When jurisdictions increase arrests and punishments for sex workers, their risk of harm increases significantly, and they are less inclined to report abuse.

The Atlanta City Council knows that arresting, fining, banishing, or otherwise further punishing street-level sex workers will not reduce prostitution – it will, in fact, increase prostitution. Instead, they are likely responding to the demands of the vigilante group Midtown Ponce Security Alliance (MPSA), some members of which are ex-cops. This group has been known to go around shining flashlights in the faces of trans and gender non-conforming people around Midtown, take pictures of them and post those pictures online or different businesses, like gas stations, calling them “trans gangs.” Trans and gender non-conforming folks report similar harassment by police, whether they are engaging in survival sex work at the time or simply being who they are, as well as hiring discrimination generally, which is one reason given for doing sex work in the first place – to generate income, or in exchange for shelter and to meet other basic needs.

After defeating the banishment ordinance, Mayor Reed was forced to start a Working Group on Prostitution (WGOP), which has met monthly three times and will meet again on July 12th, 2013 at 9-11am at Atlanta City Hall, 55 Trinity Ave. This WGOP is supposedly meant to come up with a good alternative to banishing people to deal with street-level prostitution, but so far community members are unsatisfied with the progress, the emphasis on law enforcement, and the lack of community input (as these meetings are usually on Friday mornings, when many people are at work). SNaPCo and allies decided not to wait for the WGOP to come up with a good alternative proposal, as a significant number of people on the WGOP supported banishment originally.

Given that most street-level sex workers engage in sex work as a means of generating income and surviving, SNaPCo and others wish to offer an alternative proposal that addresses the needs and motivations of sex workers instead of trying to push them away or lock them up. SNaPCo came up with the draft proposal, “Pre-Booking Diversion Program for Street-Level Sex Offenses.” This proposal calls for connecting alleged sex workers, if they choose, directly with case managers for individualized services and treatment instead of arresting or booking them at all.

Next steps for the city in the proposal include halting the ineffective arrest sweeps of street-level sex workers, accepting Ford Foundation money for travel to visit Seattle’s Law Enforcement Assisted Diversion (LEAD) program to learn from them, and officially networking and mobilizing service providers and case managers to begin formalizing an infrastructure for a solutions-based policy. This proposal’s implementation would likely cost much less, have much greater impact on reducing prostitution, and help some of the most marginalized people in society access what they need to improve their lives.

At the Coalition and Community Meeting, representatives from many different groups, organizations, and perspectives met to discuss the proposal - what we agree on and what we would add, clarify, or change. All ideas and feedback were recorded and we moved closer to a great ordinance that the whole community would support. SNaPCo and our allies will continue to work together to ensure that our decision-makers make the right choices on what policies around street-level sex work will replace the current outdated, ineffective ones.

If you would like more information about SNaPCo or to get involved with our work, please visit facebook.com/groups/snapco.

(Pictured: Ms DeeDee Chamblee, founder of LaGender, starts off the Coalition and Community Meeting by giving background on this struggle.)
Posted by Atlanta Economic Justice Program/AFSC at 11:27 PM