3 Days of Marching....What Happens Next? 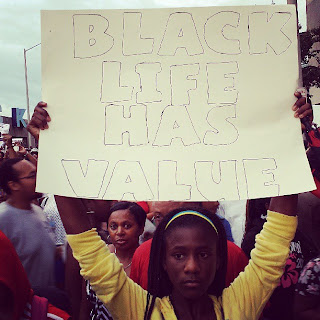 Just one hour before the Zimmerman verdict came in I found myself filled with a mix of fear, guilt, and sorrow. I ended up posting the following thought on my personal Facebook page:

“When I think about all the punk ass, pot smoking, underage drinking, prank pulling, sneaking out at night type behavior (and worse) I pulled when I was a teenager it can be a little embarrassing. To think that a cell phone picture of a kid smoking pot, mean mugging for his own camera, or a little pot plant is somehow real legitimate evidence that somehow justified his murder fucks with my soul. I'm not excited about the coming riots that are almost sure to go down if Zimmerman is found not guilty, but I certainly understand, and I hope some constructive organizing comes out of this rage and confusion that can begin to deconstruct this cancer infecting our minds, bodies, and communities. We have a long way to go ya'll.”

Well it turns out my prediction of, “coming riots” was wrong, instead there has been mass nonviolent action all over the country, with this Saturday looking to be bigger than anything we’ve seen yet. 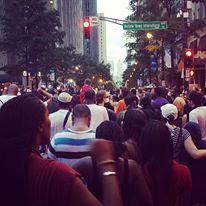 After the verdict was announced a number of conversations started on social media which resulted in an unplanned March that started in Troy Davis/Woodruff Park and went down Auburn Ave, around Edgewood Ave, and eventually back to Troy Davis/Woodruff Park. The crowd that night ebbed and flowed between 20-100 people, each time the marched stopped by a popular gathering point people came outside, mostly supportive, took pictures, joined the march, and folks were invited to participate in a much larger action the next day at the West End Park.

The next day around 1000 people gathered in the West End Park. It was interesting watching the event build on facebook. Very high percentage of folks that showed were not connected to any organization, had not been very politically active, they simply sought out a place to feel safe and express their concern/sorrow/rage with others.

The rally turned into one of the longest, energetic, marches I’ve participating in. Hundreds marched from the West End Park to Peach Tree and Andrew Young in the heart of down town. A Thousand flyers promoting a march the next day were passed out to folks on the street. Streets were totally shut down during the march which went on for over 5 miles and at one point through a thunderstorm. 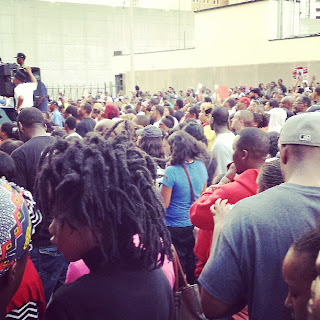 As sheets of rain covered us, and thunder cracked in the distance our voices rised even louder, loud enough to draw out folks from their apartments, from their offices, from the restaurants.

Close to where the march ended a small group of about five self-described revolutionary white kids attempted to start a riot by knocking over a trash can, which ironically belonged to a group of supporters who were cheering on the march from their porch. Immediately after dumping a community member’s trash can over they smashed a police car window, at which point folks that lived in the community confronted the small group and chased them out of the space. I was especially upset because I was marching alongside an 11 year old youngster who was just a few feet away from the unwelcomed failed attempt to incite a riot.
Attempts to incite violence have, for the most part, be rejected in favor of more focused, inclusive nonviolent action that has seen lots of families marching together demanding justice. 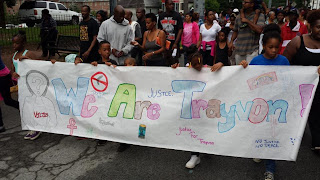 Monday’s action was significantly larger, easily more than 5,000 people spilled into the street. At one point one, before the march began, a speaker asked folks that were at their first march to raise their hands and over half the crowd raise their hands. 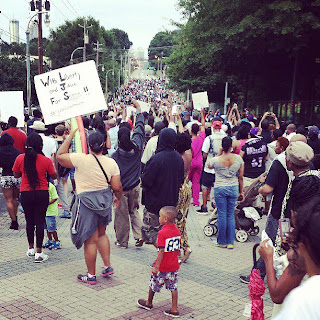 Monday’s march was significantly tamer than Sunday’s for a few reasons. There were so many people that it was difficult to get steady chants that caught on, but maybe more than that the lion share of folks participating had never done anything like this in their life.

So far the only tangible change these actions around the country seem to be directed at is Stand Your Ground Laws in Florida and Georgia and or course the desire to see George Zimmerman brought to justice. While both of those things make sense can more be pushed for?

Is the verdict that has brought people into the street, or is it the underlying knowledge that black life is less values in America as demonstrated not only by the outcome of the Zimmerman trail but unemployment rates, arrest rates, prison sentences, wages, homelessness, wealth disparity, ect?

So as we likely see even larger crowds around the country comeout this weekend I think the question that’s going to dominate my mind is where does this energy go? Is this a moment, or a movement? Jesse Jackson once said that if it’s a moment, you go home, if it’s a movement, you go to war. What does a nonviolent war against racial profiling and institutional racism look like?
Posted by Atlanta Economic Justice Program/AFSC at 11:38 PM