Hugh Trotti, Do The Right Thing 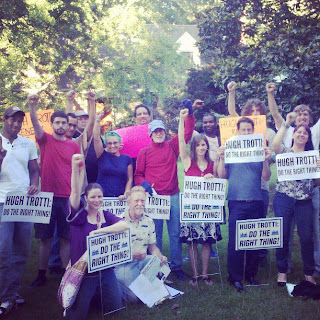 There was  a number of current and former tenants on hand to call out Mr. Trotti’s troubling pattern of evicting tenants whenever legitimate complaints are lodged. There was also several Atlanta landlords speaking out against abusive practices.

Most recently Mr. Trotti has moved forward with putting single mother Jaye Crawford out of her home of almost 15 years. Jaye has been told by her landlord that her lease ending June 30 will not be renewed. She has lived in her zoned-commercial unit for 14 years, which serves as both a living and work space for her personal training studio. When Jaye took a neighbor to court over incessant noise violations (and WON) Hugh Trotti refused to renew her lease. Mr. Trotti’s stated reason: “No one reason in particular.” Mr. Trotti has yet to address the law-breaking tenants, and has refused numerous requests for a sit-down meeting resolving this problem. We want Hugh Trotti to renew Jaye’s lease, immediately.

Should she be forced to move, she will lose her business, and her straight A student daughter may be forced to change schools. Jaye and her daughter deserve to stay in the place they call home.

In addition to the candlelight vigil, community members canvassed Mr. Trotti’s neighborhood so that his community knows how he treats his tenant.  Yard signs were set out around the neighborhood that read, “Hugh Trotti, do the right thing!"

Occupy Our Homes Atlanta continues to get calls and emails from tenants under the thumb of abusive landlords. Today we want to make it clear to Atlanta landlords that abusive practices will not be tolerated.