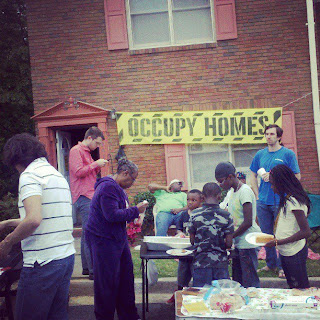 Just over a month ago Mildred Garrison Obi marched to the home she was evicted from in November of 2012 and moved back into it with the support of her neighbors, Occupy Our Homes Atlanta, National Action Network, and AFSC. Mildred has been in the home ever since.

To celebrate Mildred's home liberation and to bring her community together Mildred hosted a cook out this weekend. It was a social space where folks that have worked side by side to on Mildred's campaign could connect on a human level, learn more about each other, and enjoy delicious food.

It was also a time where neighbors were invited to come learn more about why Mildred moved back in her home, and ask questions about the legalities of her actions and what next steps are for Mildred. 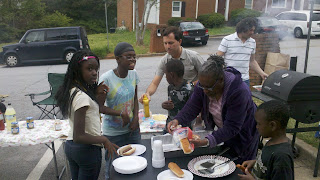 The next steps are unclear. Bank of America had opened up a line of communication with Mildred, and had put several options on the table including donating the home to a non-profit that would then donate the house back to Mildred. After some time, Mildred decided to accept that offer. Not Bank of America has decided to take that offer off the table claiming that the title is in tranisition to HUD and the home donation would be to complicated. As of Friday Bank of America now says Mildred's only option is to be evicted a second time or accept a cash for keys offer. 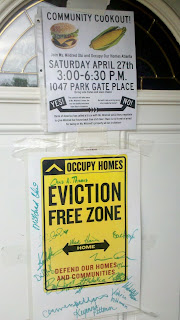 Mildred's goal has always been to stay in the place she'd called home, she has no intention of leaving. This Monday there's a call set up with Bank of America where a formal decision is to be made. We are asking that folks come to Mildred's home(1047 Park Gate Place, Stone Mountain) on Monday afternnon whenever you can. Spread the word far and wide.
Posted by Atlanta Economic Justice Program/AFSC at 5:48 PM