An Inside View To Coca Cola's Share Holders Meeting 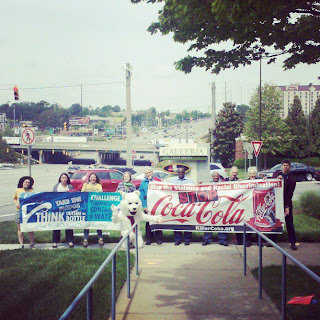 Last year, with the help of the Killer Coke Campaign, I purchased a small amount of Coca Cola stock in an effort to attend their annual share holders meeting. Last year around 30 of us decided to crash the meeting and  disrupt the CEO every time he spoke half truth or straight up lied; there we lots of disruptions.

From the very beginning of this years share holders meeting it was very clear that this years meeting was to be extremely controlled and scripted. When I attempted to enter the meeting I was told that I wasn't on the list, despite that fact that I'm a share holder. I could in fact easily overhear one of the Coca Cola staff people pull the person who was working the registration table aside and say something like, "That's one of those Occupy people." Share holders meetings have traditionally been a space where criticisms and concerns about policy and direction are discussed.

After I called the company that holds my shares of Coca Cola and had them fax over proof of ownership I was finally allowed in.

The meeting began with a well rehearsed "impromptu" interview with Warren Buffet who owns an enormous amount of Coca Cola stock. Buffet claimed that Coca Cola's best years are ahead of them, that Coca Cola's happiness in a bottle, and that children being born today will be the luckiest in global history.

Of course Coca Cola isn't happiness in a bottle, it's high fructose corn syrup water that happened to be contained inside of very well branded container. Coca Cola's sales have not gone up, their profit has. What does that mean? It means they have been creative about how to cut from the bottom line, destroy competition, and stop their workforce from organizing. Whether that's firing staff in Atlanta for communicating to union organizers, attempting to force employees to watch anti-union propaganda, turning a blind eye to child labor in their sugar cane supply chain, ignoring the murder of bottling plant staff in Columbia who were trying to organize the workforce, intimidating college campus organizers and faculty for trying to ban all plastic bottles, I could go on and on.

We were then treated to a 30 minute feel good session about this new water filtration system that will bring thousands of gallons of water to struggling pockets of the earth. They brought out the inventor to the stage, who apparently also invented the beloved segway. What they failed to explain clearly is that Coca Cola has no plans to give away all this water to struggling people, they plan to sell it. Selling water in third world nations could actually represent Coca Cola's future, as more and more of the worlds water supply in now contaminated.

When the we transitioned into the business part of the meeting, which should have been the main part of the meeting but was instead rushed through, they allowed for only six questions from the audience, just six. Out of six, four of the questions were critical of Coca Cola.

Coca Cola bluntly denied criticism about their human rights violations, they also denied that there's anything unhealthy in their beverages. After refusing to address shareholder concerns the CEO launched into a 30 minute feel good session about how great Coca Cola is for sponsoring the special Olympics. Don't get me wrong, I think the special Olympics has great merit, but there was something very unsettling about the photo op they created at the share holders meeting by bringing up special Olympics athletes, putting coke bottles in their hands and having them do a toast on stage to Coca Cola. I, like everyone else gave these brave athletes a standing ovation, I also teared up at the thought that these athletes were being used as a coke PR stunt.