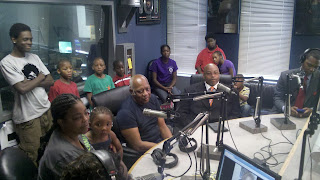 Tacco Cullins was renting a rundown home for $600 per month when she got into a dispute with the “landlords” over repairs that needed to be done to the house.

There were holes in the walls and floors and broken windows that the landlords promised to fix. When they didn’t perform the repairs Ms. Cullins withheld her rent. Her “landlords” eventually attempted to evict her and her 11 children assuming that Tacco wouldn’t have the resources for a lawyer. She did, and while at court it became clear that the men who leased her the property where not in fact the owners at all. 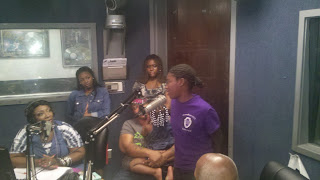 Tacco Cullins and her children ranging in age from 19 to 2 had to move immediately and are now staying in a hotel, thanks to Atlanta Travelers Aid. The Department of Family and Children’s Services (DFACS) has threatened to take the children from Ms. Cullins unless they have someplace stable to live.

Yesterday Tacco and the whole family had the chance to tell their story over and over again, from 7am-9pm. We started with almost two hours of live air time on V103 with Frank and Wanda.During the V103 interview a CBS channel 46 was in the studio filming. It was quite an experience to be in the studio with the whole family and a film crew. 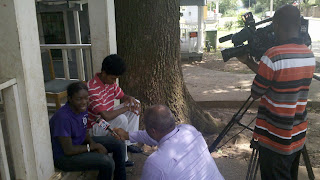 After Frank and Wanda’s show we went down the hall for an interview with WOAK’s Lorraine Jacques White for a 20 minute interview. Lorriane, Frank, and Wanda all encouraged their audiences to give big online.

During our interview with Lorraine we got a call from Fox 5 who asked if they could come out and do a story in Tacco’s neighborhood, which fit right into our day. Last Monday we bagan working with Pittsburgh Resurrection to develop a series of life skills sessions for the whole family, so we were in the area any way. Click here to see the Fox 5 story. 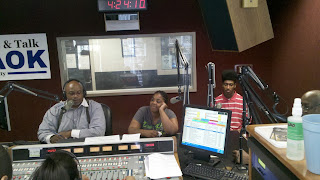 Our last interview of the day was with WOAK’s Derek Boazman. Derek devoted his whole three hour show to talking about Tacco and challenging his listeners to step up and donate.
After we left WOAK we rushed back to the hotel Tacco and her kids are staying in and to meet with SCAP organizers about developing a short film concept to be shot and edited by the Cullins children.
What a day!
We are now taking stock of all the donations and pledges that were made yesterday. We aren’t sure just how much was raised yet, but we do know that the Cullins family should be able to move into a new home this week!

Is this a model for helping all people in struggle for housing? NO. We clearly will not be able to build these types of press junkets for everyone, but Atlanta literally has no safety net for a family of this size in crisis. Our commitment to work side by side with Tacco isn’t just humanitarian, it’s political as well. How can a city due away with public housing, freeze all section 8, attempt to close down and defund homeless shelters and homeless services, yet make sure there are resources to forcibly split up a loving family and funnel them into a seriously broken, sometimes abusive system?

Tacco’s struggle has highlighted the crisis of economic priority that existed long before folks were Occupying Wall Street. It has also unearthed racial prejudice in many who have viewed and commented on the story.
In America, large white families are often celebrated. We see them on reality tv, iconic sitcoms, and in the movie theaters. Some folks are less comfortable seeing non-white large families, especially in low income communities. 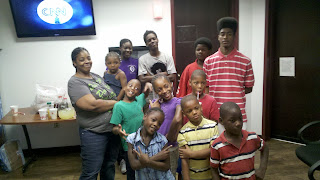 Yesterday was a great day for the Cullins family, but the real challenge is tomorrow. Overcoming generations of poverty has proved difficult for most, but Tacco and her family seem up for the challenge. It’s been exciting to see peers of Tacco, who have broken the chain of poverty themselves, come out of the woodwork and offer their time and friendship to Tacco.

At this point Tacco aspires to write a book on her experiences, help organize with Occupy Our Homes ATL, and develop a childcare business. We’re all excited to be a small part of that path!

Donate to Tacco Cullins Family Fund By licking this