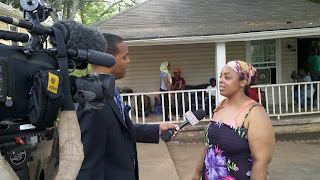 Occupy Our Homes ATL, the Pittsburgh Community, and American Friends Service Committee call on our city to find a solution that keeps Tacco Cullin’s loving family together. We believe that Atlanta and its residents can make this happen.

Tacco Collins reached out last week in a desperate situation. She was living in a substandard three-bedroom house with no electricity and had just run out of food to feed her family. 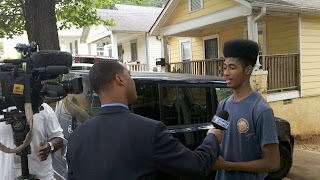 Tacco signed a rental agreement with her landlord in February of 2011. Before she moved in the landlord made a promise to fix the flooring, replace the water heater, fix the shower, and paint the interior, none of which ever happened.

In July of 2011 her electrical box exploded and the landlord refused to fix it, leaving her with no power. She decided to withhold rent until it was fixed, and instead of fixing it the landlord tried to evict her. After Tacco took her landlord to court she discovered that he didn’t actually own the house at all, it belonged to an investor in White Plains, New York.

What we have now is a short period of time to find permanent housing for the family or they face homelessness, and there are serious challenges.

Atlanta is the only major city in the US with no public housing, we have a moratorium on section 8 vouchers, and it seems that no shelter can take a family of Tacco’s size. Atlanta’s only solution seems to be to funnel the family into yet another underfunded inadequate system. To add insult to injury there are literally hundreds of large boarded up homes in Tacco’s community that have been sitting unused for years.

One thing that’s clear to anyone who spends time with this family is that they love and need each other. The unique bond between the children and their mother is tender and truly moving. This family needs to remain together. What they lack in capital, they certainly more than make up in devotion to each other.

We are asking all that can to contribute to helping Tacco and her 11 children a stable place to live.
Link to Wepay:
https://www.wepay.com/donations/keep-tacco-collins-single-mother-of-11-from-becoming-homeless

At AFSC we believe that housing is a human right. The United States is the richest country in the world, we spent billions to fund a global war on terror,yet we don't have the safely net to catch struggling families in crisis in our own backyard. Tacco is a full time mother who can't take on work, we call on the community to step up and help us find a sustainable solution.