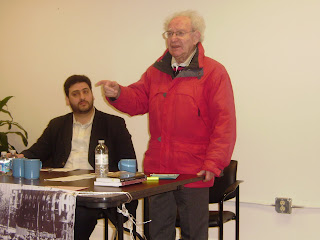 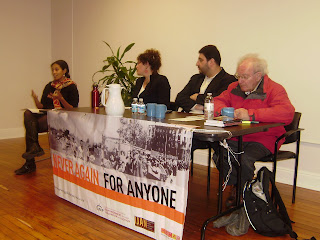 Much of the evening's event was spent hearing the lesson's that Dr. Hajo Meyer learned from his experience in the Auschwitz concentration camp. Dr. Meyer had tried to escape Nazi Germany but was apprehended and sent to Aushwitzat age 14. It was clear, listening to his story, that Dr. Meyer was deeply effected by his experience; so much so that he has dedicated his life to speaking out against oppression, and the dehumanization of others based on color,class, religion, or creed.

Dr. Meyer expressed specific concern and outrage over the use of the holocaust tragedy, a tragedy the he personally experienced, as an excuse to oppress, abuse, and subjugate other ethnic groups, specifically the Palestinians.
Dr. Meyer went on to draw parallels between his experience in Auschwitz, the overall strategy of the Nazi party, and the treatment of Palestinians by Israel.

Dr. Meyer presented a critical analysis of Zionism, drawing the audiences attention to the deep philosophical paradoxes between Zionism and Judaism.

Also on the panel was Osama Abu Irshaid, and Edget Betru with the Malcolm X Grass Roots Movement.

Listening to all of the speakers last night drove home the dehumanization process that occurs when we lump groups of people into simple categories and treat or view these categorical communities as if they work off one brain, as if they are some sort of monolith.