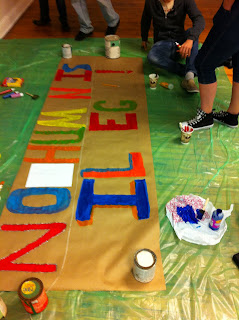 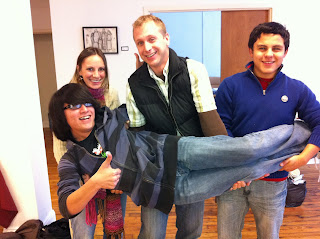 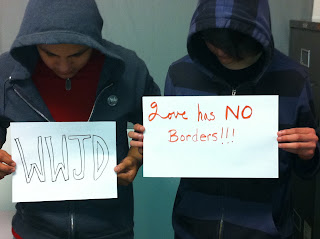 Migrant Youth Voice is a project of AFSC created to lift the often unheard voices of undocumented and latino youth into the public discourse on immigration reform. Too often we hear the pontifications of those who are unaffected by the immigration policy. Too often we are fed unrealistic fears paraded as truths by politians and pundits who seek to gain political capital. We hope to amplify the human voices who simply dream of having a lawful existence in the nation that they call home.

This past Saturday we organized a youth conference in support of Migrant Youth Voice. Storycorps expressed interest in this national campaign and joined us to record interviews that would be considered for radio play on NPR. Youth came to participate in learning about current legislation, they came to share their stories and link the ties between how immigration policies have already been affecting their lives. Most importantly, these students came to be heard and begin to make a change.

As these students shared their stories of facing racism and xenophobia it became clear that even at a high school age there is an understanding of what an undocumented student or peer is being deprived of. A lot of the undocumented students we encounter do not recall coming to the United States. This has always been their country. If these youth were to be deported they would be going to a country completely foreign to them. This is the reality that many undocumented students are living with. It is a fear of simply trying to make a life for themselves in a country that seems to be trying to criminalize them more and more. One young man specifically mentioned he and his family having to move out of a county that enforced 287(g); a law that gives law enforcement authority to use racial profiling and detain undocumented individuals for unspecified periods of time. We learned how all undocumented families are living in fear. “Ojale no me pare la policia”.

This is one of the many, many reasons the kids came to share their stories. To put a face to who is actually being affected by these detrimental pieces of legislation. Students were inspired to film their stories anonymously. They were inspired to get involved and get others involved. Banners were made for GLAHR’s upcoming immigration march, discussions were had with the GADREAMERS to give kids a better understanding on local immigration issues. We had fun group exercises to get everyone working together and grasp the concept and importance of working with others to reach a desired goal for all.

As we approached the end of the day, students were coming up to us asking when we could meet again. They are telling their friends and family members and they want to get their stories out there. They want a future for themselves and their families here in the U.S. and they are going to fight for it.

The most important part of Migrant Youth Voice has been to inspire youth to be vocal on the issues that are affecting them and through this project to have achieved a sense of fulfillment and pride in themselves and their hard working immigrant families. We are so proud of you guys! And we can’t wait to share your stories with the world.