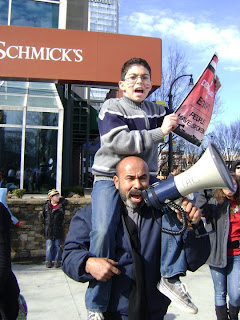 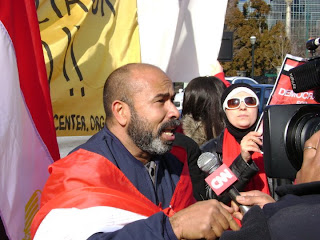 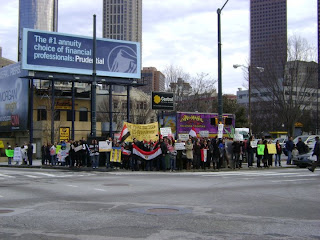 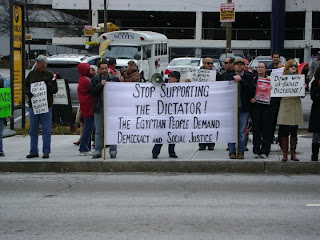 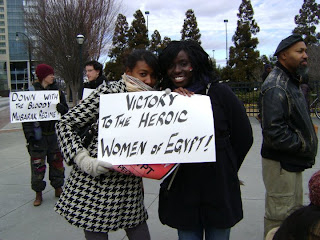 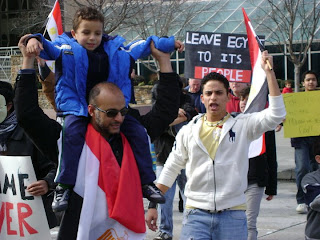 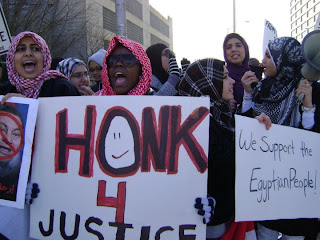 Today the second demonstration in solidarity with the Egyptian people took place in Atlanta, again in front of the CNN center. There was some concern that less people would come out today due to the cold weather. Those concerns were smashed by the time 1:30pm rolled around. There were easily 300 people, maybe more, and the energy was much stronger.

Folks filled all four intersection corners and at the height of the demonstration a group of fifty of so jay walked from corner to corner to the beat of drums and chants over mega phones, lifting signs and waving flags.

There was also concern that after President Mubarak's last Wednesday, and the clearly Government manufactured clash amongst Mubarak supporters(who were found to be on the government payroll) and those calling for democracy and Mubarak's removal, that there would be a split in the Egyptian American community. There was not. The unity amongst all who came was twice a strong, twice as loud as last week. It seems the Egyptian Government has failed to fool anyone, and the train of revolution seems unstoppable at this point.


“The revolt in Egypt is not an ideological or religious one,” Said Sam Abdelaziz, one of the organizers of today's rally. “It is a natural human reaction to reject injustice and corruption. People in Egypt and everywhere in the world have the same dreams, hopes, and aspirations to see their kids doing better than they did, to be able to support their families, find jobs, and live dignified lives. Geography has nothing to do with dreams.”

"Egypt has lots of resources but only the elite prosper,” said Dr. Nagi Gebraeel, another local organizer. “There is no middle class, the people are impoverished. 41 million people live below the poverty line, the price for basic food is very high, and the infrastructure is decaying."

Organizers for today's rally have called for a third rally, to take place next Saturday February 12th from 12-3pm.

American Friends Service Committee Atlanta has been excited to be a part of this local effort in Atlanta and the last few weeks have filled our heart with hope for grassroots organizing and humanity in general. The acts of non-violent revolution in Egypt in the past week have personally brought me to tears at times, they are historic.Muslims, Christians, Atheists, students, workers, young, and old working together in the streets. It will be studied, and perhaps emulated by others for years to come.

To read AFSC's official statement on the revolution in Egypt and it's regional impact visit: