Police Harassment of Food Not Bombs in Hurt Park 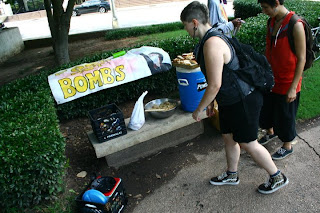 Georgia State University police told Food Not Bombs members that they were not allowed to serve food in Hurt Park.

Food Not Bombs, a group that says food is a human right, was serving a free meal in Hurt park on Wednesday, August 18 when a police officer ordered a nearby man to leave the park because he was lying down. Copwatch members who were present began filming the incident and followed the police officer and the man onto the sidewalk. The officer ordered copwatchers to go back into the park about 40 feet away, threatening to charge them with "obstruction", while other passers by were allowed to walk right by the officer. Soon, more officers arrived and began talking to the man who was being kicked out of the park.

When the cops were done speaking to the man, they came up to copwatchers and began questioning them about the Food Not Bombs meal. The police claimed that it is illegal to serve food in the park and demanded to see a permit. The police threatened to throw away FNB's food and dishes if the group did not leave the park. The meal was almost over anyway, so FNB members decided among themselves to take their supplies and leave.

Some speculated that the police attention on Food Not Bombs was retribution for the monitoring by Copwatch. According to Vincent Castillenti, the Copwatch cameraperson, "I don't think that they would have been concerned with Food Not Bombs if it hadn't been for us filming them."

This incident is not isolated; it comes in the midst of a campaign by the city to make the downtown area hostile to the homeless in an attempt to drive them away. Homeless people who frequent Hurt Park say that police harassment is a common event there. In 2000, Food Not Bombs won a lawsuit against the city after the group was prevented from serving serving food in public parks.

Food Not Bombs is likely to face harassment again from these and other police. As the GSU school year begins, police are likely to start cracking down on the homeless. Food Not Bombs is requesting that people come to Hurt Park on upcoming Wednesdays at 5:00 pm to partake of the meal and to bear witness if further harassment occurs.


For more information on what Copwatch is visit:
copwatchoea.org