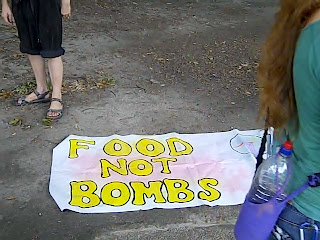 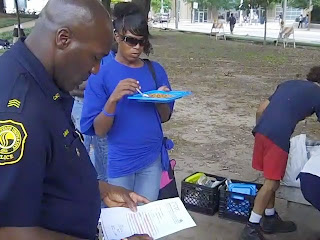 On August 18th, during Atlanta Food Not Bombs(FNB) regular feed at Hurt park, members of FNB noticed police harassing one of the folks that came out to share a meal with them. Several FNB members confronted Atlanta police officers who had targeted the man while he was laying down in the park. FNB members noted that there were numerous people relaxing in the part and questioned why this man was being targeted. FNB then asked numeruous times if the officers would give them their names and assignment numbers to no avail. The police escorted the man from the park, seemingly accusing him of vagrancy.

In What appeared to be retaliation several Atlanta police officer confronted FNB demanding to see a permit t serve food and when FNB was unable to produce a permit(which they asserted they did not need to have) police forced them to leave the park and ordered them not to return next week without a permit to serve food.

FBN put a call out to folks in their network to come out and support their August 25th feed at Hurt Park and AFSC was all to happy to see what we could do. Before the scheduled 5pm meal I printed off several copies of the ACLU letter which asserts FNB right to serve food at any Atlanta city park. The letter highlights the FNB lawsuit victory against the city of Atlanta in 2000. The lawsuit being a result of past police harassment toward FNB feeds in the city.
When I showed up to Hurt park it was clear that others had answered the call to show up and support FBN right to feed Atlanta, and it was clear that FNB was also prepared having brought their own copy of the letter.


After just a few minutes into the feed five police officers showed up and stood at the edge of the park. One came down and asked if FNB had obtained permission to feed people. Jose Sanchez, with FNB, presented the letter to the police officer and after the officer read the letter he then backed down and the feed continued. The police did not simply leave though. Four officers conitued to circle the group for the remainder of the feed and at one point one of the officers went out of his way to started an argument with a FNB member over her right to ask his name and assignment number.

It's clear that FNB will likely continue to face a shockingly aggressive police force at Hurt Park. AFSC plans to continue to support their feeds, bringing our witness and an empty stomach to their Weekly feed at Hurt park(Edgewood & Courtland) on Wednesdays at 5pm. See you there!