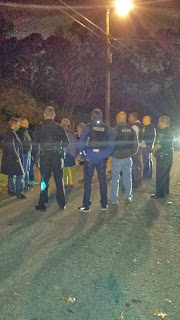 For the past  15 weeks, supporters of Veteran MarkHarris, who was evicted at gunpoint by Fannie Mae, have been holding a candlelight vigil in front of Fannie Mae VP, Candy Lasher's home. Tonight, over 15 DeKalb county police officers, many in tactical gear, were sent to break up the peaceful vigil, threatening everyone with citations and arrest. American Friends Service Committee has been involved in Mark's campaign for the last year and has had a presence at every candlelight vigil. It was a truly horrifying scene to experience first hand, there was a feeling that anything could happen to us in what seemed like a militarized zone.

They cited an obscure ordinance aimed at stifling union organizing, claiming that the solemn, silent candlelight vigil was actually a picket that potentially blocked An entrance, threatened people, or encouraged a boycott of some sort. The simple fact is that in all of our research we have found no law which prohibits candlelight vigils on public property. Below is an open letter to DeKalb County Police chief Cedric Alexander by Mother and Homemaker Kathy Akcer who was present and traumatized by last night’s police action. Kathy is pictured in this photo, she's wearing the green dress and the blue jacket: 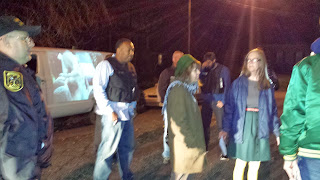 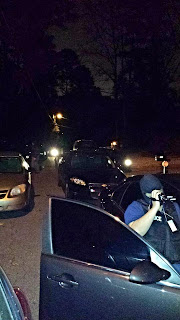 In 1984 we moved to DeKalb County and bought our first home. My baby was born in this house; he attended public school from kindergarten through high school;  and he is now married and a mathematics teacher.

My DeKalb County police officers have always been there for me;  from protecting the children at school to patrolling my house when I was out of town to going door-to-door to check on our safety the night a  neighbor was violently assaulted in her home. They even counseled us after the young hiker was murdered by a horrible serial killer who frequented our neighborhood park.

As moms, we always told our children that if they were ever in trouble they should run to the Policeman.

Tonight I attended a candlelight vigil for Army Veteran Mark Harris. I met
Mark after Fannie Mae evicted him from his home of eighteen years.
After meeting Mark, how could I not attend the vigil for this brave Veteran
and father?

Imagine how I felt when standing in a cul de sac, out of the mist of
headlights fifteen "action figures" - fully armed and dressed in black skull
caps and bullet-proof vests - converged on us. It was like a scene from
"Zero Dark Thirty" when the black helicopters dropped the SEALS and
under cover of darkness they closed in on Osama Bin Laden. Only
the homemaker and mother in the autumn-yellow tights and a dress
was no Osama Bin Laden.

The very idea that in economic hard times for working folks - and with
DeKalb County strapped for police officers - tax-payer dollars would be
spent to send fifteen officers, five squad cars, and a prisoner transport
vehicle to intimidate seven citizens (three of them seniors) is an outrage.
As stated above, there are real criminals in the county - murderers and
sexual assailants - for the police to stop.

Tonight I feel so disappointed by the police officers I have always trusted.
I feel scared of the officers I thought would protect me.
I am still shaking.

CEO Mays and Chief Alexander, why does Fannie Mae - one of the chief
culprits in the Great Recession - deserve more protection from you than a
regular person like me or an honorable Veteran like Mark?