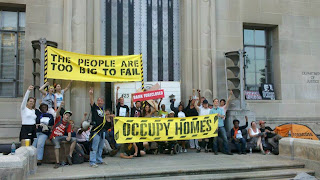 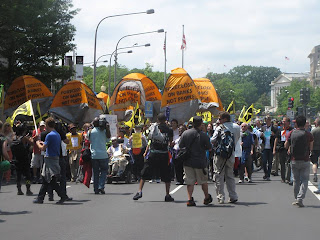 On Monday, May 20th, 500 residents and activists took the streets in our nation's capital to demand that Eric Holder hold Wall Street accountable and the Department of Justice actually serve justice to the bankers that are taking our homes. 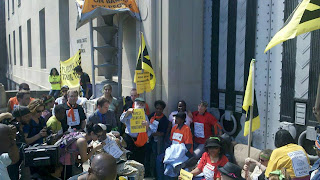 The march blocked the main door of the Department of Justice as we demanded an audience with Eric Holder, so he could respond to the letter we sent him last week. Since the Attorney General decided not to show his face, we decided to wait for him outside. 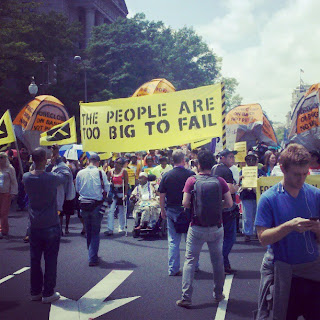 As we waited over the course of two days 25 residents and activists that were either fighting for homes, or had fought for homes, were arrested. Instead of giving their actual names they gave their jailors the names of bank executives that the Department of Justice should spend its resources prosecuting instead of homeowners fighting for justice. 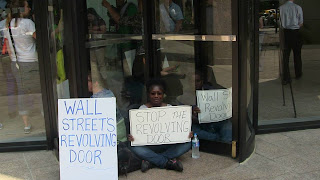 Because of our bold action in concert with other organizations like the Home Defenders League, and brave residents willing to risk arrest and police violence in the name of real justice, homeowners going by the name of Jamie Dimon and other nefarious executives have arrest hearings in Washington DC today. 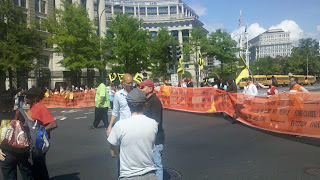 35 Atlantan’s made the trip including 10 homeowners who have lost their homes or are currently fighting foreclosure. The action made national news after footage of Atlanta foreclosure fighter, Carmen Pittman, was tasered at point blank without warning but Homeland security officers while nonviolently protesting.