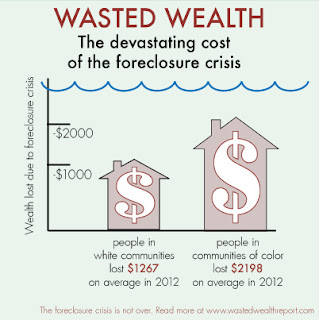 The City of Atlanta lost 901.8 million dollars in wealth due to the foreclosure crisis in 2012, according to a new analysis. The most devastating impacts were felt in communities of color: in zip codes with majorities of people of color, average lost wealth per household was $4,900, more than two times the average lost wealth($2,300) of  in segregated white zip codes.

These are among the key findings of a landmark study, “Wasted Wealth: The Foreclosure Epidemic, a Generational Crisis for Communities of Color,” released today by Occupy Our Homes Atlanta with the Alliance for a Just Society, Home Defenders League, and The New Bottom Line. Wasted Wealthanalyzes 2012 foreclosure data to calculate lost wealth, examines the ongoing threat of foreclosures-in-waiting, and explores the economic impacts of principal reduction.

“While the impacts of the housing crisis have been felt broadly across communities and across the country, these data shows that there’s a clear racial dimension to the foreclosure crisis: households in communities of color are the hardest hit,” said report co-author Jill Reese, Associate Director of the Alliance for a Just Society.

The full report, including national numbers, data for all 50 states, and special breakouts for 19 cities, is available here: wastedwealthreport.com

“Seeing this loss of wealth per household is profound. People of color in Atlanta, whose majority equity holdings remain in real estate, have been particularly affected by the crisis,” said Joe Beasley with Rainbow Push Coalition. “Without principal reduction or other interventions, people of color in this city will continue to bear the brunt of this crisis.”

“The country cannot ignore the damage it has caused on my life, and the lives of homeowners in my community,” says Mark Harris “The threat to my family and our safety, the threat of losing our home is unacceptable.”

“Veterans like Mark Harris have been stepping up and fighting for their homes,” says Tim Franzen with American Friends Service Committee.“This report confirms that the housing crisis in Atlanta is far from over.”


In addition to wealth already lost in communities like Mark Harris’, the report found there were at lease 36,000 underwater mortgages still on the books in Atlanta 2012 and another $606.9 in wealth at stake if a share of these mortgages go into foreclosure.


Homeowners like Mark Harris have worked with Occupy Our Homes Atlanta to push Congress and the Administration to deal with the current and pending crisis by enacting principal reduction.


The report examines the economics of principal reduction; finding that a principal write-down program could save underwater homeowners in Atlanta an average of $6,700 annually, generate $242,200. in economic activity, and create 3,600 jobs.


“One of the strongest changes we could make as a nation is to implement principal reduction for homeowners,” says Franzen` “We would stop the local bleeding and put $6,700 into the pockets of homeowners.”


The full report, including national numbers, data for all 50 states, and special breakouts for 19 cities, is available here: Wastedwealthreport.com


The Atlanta report can be viewed here: http://www.wastedwealthreport.com/atlanta
Posted by Atlanta Economic Justice Program/AFSC at 11:27 AM