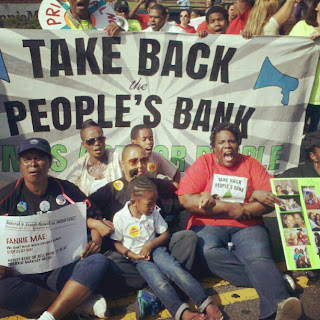 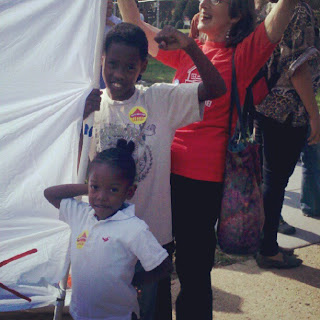 Over the past few months American Friends Service Committee has actively organized alongside Occupy Our Homes, Right to The City, and the Home Defenders League in an effort to challenge Fannie Mae and Freddy Mac to not only reduce mortgage principles to actual current values, allow struggling homeowners to rent or buy back the homes they've already lost, and turn over the countless abandoned homes they've been sitting on for years to non-profits and community orgs committed to the neighborhoods these empty homes exist in. 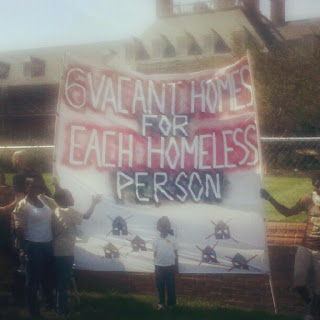 After pulling off actions at every regional Fannie/Freddie office in early September, several cities decided to send delegations to Washington DC to confront Freddie and Fannie at their national offices.

With little time to organize, we were able to pull eleven folks from Atlanta to make the trip.

Micheline Meusa, Renika Wheeler and their two children were among our Atlanta delegation. Both have lost jobs in the last six months and as a result of having a very limited safety net they ended up on the street. Renika and Micheline have bounced from shelter to shelter and have been unable to obtain work, despite looking for work almost every day. Renika and Micheline represent a segment of the population that has, up to this point, often been left out of the housing crisis conversation.

One thing that was exciting about today's action was having the story's of homeowners, renters, and homeless elevated  to the some importance.

The sad fact is that Atlanta has six empty homes for every homeless person, and Atlanta is full of homeless people now more then ever.

After demonstrating outside Fannie Mae this morning, five people impacted by Fannie's practices decided to commit an act of civil disobedience that landed them in jail, Renika was one of them. She's out now! 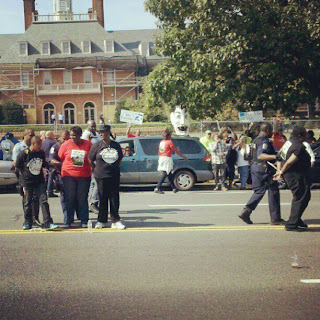 After leaving Fannie we made a quick trip to Freddie Macs headquarters, then we decided to do something special.

All of us went to Edward Demarco's to not only give him a piece of our mind and deliver a pink slip, we also had a pizza party on his lawn.

Some of the media coverage:

Posted by Atlanta Economic Justice Program/AFSC at 2:52 AM