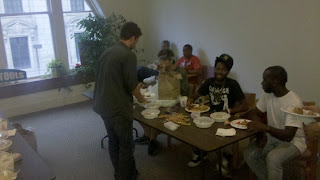 This evening around twenty volunteers staffed the phones as over 14,000 calls were made to underwater home owners in the metro Atlanta area in an effort to bring folks together for a town hall meeting to address Atlanta's historic housing crisis.

The robo calls were set up courtesy of the Home Defenders League, which is supporting grass roots efforts around housing justice all over the country.

After two hours of hard work staffing the phones volunteers took a break to enjoy dinner together and debrief on the experience talking to so many who are silently struggling with loosing their home.

American Friends Service Committee is excited to sponsor the town hall along with Senator Vincent Fort and Occupy Our Homes ATL.

More on the Town Hall: 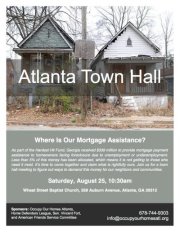 What: Atlanta Townhall meeting to address mortgage assistance and general housing issues
When: Saturday August 25th at 10:30am
Where: Wheat Street Baptist Church, 359 Auburn Ave, Atlanta Ga 30312
Facebook Event Link
Georgia continues to be battered by the foreclosure crisis, consistently rated as one of the most affected states. Despite this fact, there seems to be little to no relief for the people who are struggling the most. From Governor Nathan Deal's remarks that responsible homeowners don't need assistance, to Edward DeMarco's recent statement against principle reduction to prevent intentional default, it is clear that our politicians are out of touch and unwilling to do what it takes to help solve the problem.

In 2010, the federal government designated billions of dollars to be used to help homeowners in states like Georgia, called the "Hardest Hit Funds." To date, that money is not being used to help those who need it most. It's time we stop waiting for this help to come around, and start coming together to demand it. At the Townhall event on Saturday, we'll figure out ways to do just that.
Posted by Atlanta Economic Justice Program/AFSC at 12:15 AM