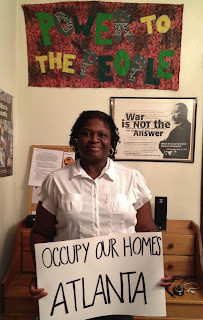 We moved into our home in March of 2007. At the time of the signing I thought my realtor was my friend and had my best interests at heart. That ended up not being the case.
Since I closed on the house, I've been paying for repairs to keep it livable. Being disabled and on a fixed income it was very hard to do repairs and pay the mortgage on time. Until August 2011 I was working a part time job in order to keep up with mortgage payments. My hours were cut, and it suddenly wasn't enough to pay the mortgage. Then, to make matters worse, my grandmother became very ill and was unable to be left by herself anymore. I gave up my part time job to watch over my 96 year old grandmother. I tried to get another job at home, but was not qualified or didn't have enough to pay a starting fee. It was hard for me to get another job because of my disability.

Because I lost that extra income, I fell behind on mortgage payments. I asked my loan officer if I could pay partial payments until I could catch up, but he said, “No. We will not accept partial payment. You have to pay all you owe. Do you have a job yet?” I told him I was still unemployed because looking after my seriously ill grandmother was full time. His response was, “Let us know when you find a job.”
The loan officer then told me he would send a package out to me so I could detail my financial status in order to see if I qualified for any programs. I filled it out with all required information and documentation and sent it back to State Home Mortgage. They conveniently lost my package. When I confronted them about it two months later and provided them with a copy of the package they sent me it only took them two days to let me know I didn't qualify for any programs.
I was referred to the NARRI Housing Program, where I was told I'd get help getting a Making Homes Affordable Loan Modification. I paid NARRI $1000 and signed paperwork. They said they would do the rest. I started with them in January of 2012 and it took until May 2012 for me to get my $1000 denial letter from NARRI.
Soon after my second, and more expensive, denial State Home Mortgage sent me a letter saying they were going to foreclose and sell the home. They told me to get in touch with HUD and see if they would allow me to stay for a few weeks. HUD told me that I had 20 days to solve the issue or I would be asked to move before the home was sold.
As the 20 days were coming to a close I went to congressman David Scott's Homeowner Relief event that was set up to help people save their homes. These events typically bring together loan servicers from across the region. State Home Mortgage was not present so I spoke to a HUD representative. We spoke at length about my housing situation and the HUD representative said she’d call me back after doing some investigation.
A week later the HUD representative called back saying she had received an email from State Home Mortgage, my servicer. In the email State Home claimed they had offered me numerous solutions and I had refused all of them. State Home offered me nothing. I informed the HUD representative that what State Home said was not true. The HUD representative said, "You just need to move and in 3 years you will be able to get another house." I explained that my 96 year old grandmother was bed-ridden with cancer and moving her right now would not be good. The HUD representative told me,"You have almost 60 days and that should give you enough time to move her.” I told her about the letter from the doctor about moving her and asking for an extension and she said, “We don't give extensions, and if we did, it would be for no more than 30 days and that would only give you until the end of August.”
I sent the letter off anyway and the request came back denied. They said her illness and the letter from the doctor was not enough to delay the foreclosure. I called Mr. Warner at State Home and asked why they told HUD they had offered me other options when they did not. I asked him why they didn't even offer me deed in lieu of foreclosure (AKA Cash-for-Keys) or a short sale, he said I didn't qualify and it was too late now. I asked him what I was supposed to do with my grandmother in such a fragile state. He said,"Call the Salvation Army or United Way and see if they can help you.”
I responded, “And say what, that my ill 96 year old grandmother and I are homeless because I had the heart to tend to a loved one? Why would I call them?” I was so hurt.
I was hurt because I think about all I have done to make the house livable. I had to put in a new air conditioner unit, because the old one was broken. The utility bills were very high, especially during the summer time. The hot water heater had to be replaced and brought up to code, it went out and flooded a bedroom and the garage. It was not enough damage for the home insurance to cover so I had to pay. The shower in master bedroom started leaking, developed mold, up and downstairs. I had to re-carpet upstairs, replace both sinks and faucets due to leaks. Fix the dishwasher and replace garbage disposal because it was draining into the other side of the sink. The refrigerator stopped working and I had to replace it. I had the house insulated, doors fixed and had a room removed from downstairs that was covered with mold and mildew. I have spent so much money on this house and it is just heartbreaking to know they insist on not lowering my monthly payment or interest rate.
State Home Mortgage insists on kicking my grandmother and I out of our home. If my grandmother is forced to move, it will cause her already fragile situation to get even worse.
I pray that a solution to this problem is found soon. I was able to delay the foreclosure auction from August to October, but the mortgage companies prefer to sell their house for little or nothing  to actually working with their customers. It was not my choice to become disabled. But because I am my income has suffered. It was not my grandmother’s choice to fall ill with cancer. But because she did her life has suffered.  My letter is very long, but I needed to talk about it.