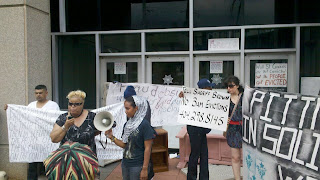 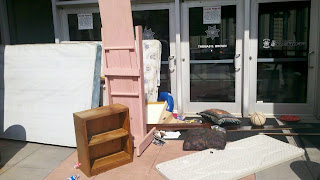 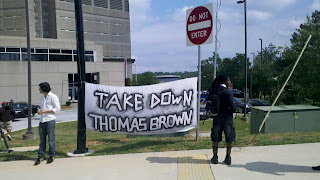 Occupy Atlanta and community allies organized a rally outside of Sheriff Thomas Browns office at 4415 Memorial Drive today. Over 100 people showed up with signs and carrying some of the wreckage that Sheriff Brown and his officers left in Chris Frazer's lawn less than a week ago. The furniture was place in front the entrance to the Sheriff's department with the idea of bring the housing crisis right to the Sheriff's doorstep. The Sheriff's office locked the door and refused to respond to community concerns. Chris Frazer, Carmen Pittman, and Pastor Johnson all spoke to the crowd outside of the Sheriffs department demanding that Sheriff Brown apologize and let Chris Frazer back in her home. After the demonstration Dekalb Sheriff Officers pulled over one of the lead organizers for no reason,threatened anyone who attempted to film the scene, impounded the vehicle, and cuffed an activists that refused to stop recorded Sheriff Browns officers as they obstructed the law. Later that activist was taken to Grady hospital for injuries and released from custody. Chris’ house was foreclosed on fraudulently by Investors One Corporation in October 2011, and she a case currently in federal court disputing the foreclosure. In March, activists with Occupy Atlanta set up camp on her lawn and committed to stay to defend Chris’ home from eviction. Using what sheriff Thomas Brown himself referred to as “intelligence,” Dekalb County law enforcement waited until activists were not present at the home, and the neighbors would be asleep, to serve an unprecedented eviction after hours, putting 4 generations including her 85 year old mother, and 3 year old grandson out on the curb. They refused to allow Chris to shower or for her mother to get dressed; they told Chris to behave as if it were a fire drill. They even rounded up her dogs and took them to the pound. The police blockaded the neighborhood and wouldn’t allow anyone to help secure the family’s valuable personal belongings from the side of the road, and they stole many of Chris’s valuables. Once again, it is clear that the government and our law enforcement officials are being used to serve and protect the interest of the 1% and not of ordinary people or even the laws that they have put in place. Occupy Atlanta and community allies are more committed than ever to the fight for Chris Frazer’s home, and the thousands of other homeowners just like her who are being disrespected every day. We cannot afford to allow Sheriff Thomas Brown to disrespect are communities in this fashion. We demand that he lets the family back into the place they've called home for the past 18 yrs. We will be meeting outside of his office Monday evening, 4-6pm, carrying signs and banners asking why he would choose to leave a family homeless at 3 in the morning at gun point and allowed her valuables to be stolen.

There are a lot of unexpected charges adding up now dealing with the eviction. Chris is scrambling to find a place for her family to stay, a storage unit for all of their belongings, and even has to pay to get the dogs out of the pound. Please donate to help in anyway you can. https://www.wepay.com/x2tg0qn/donations/193827