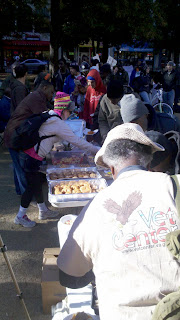 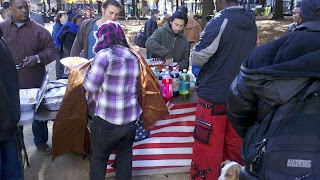 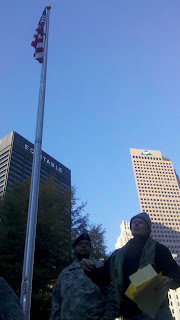 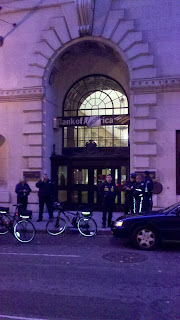 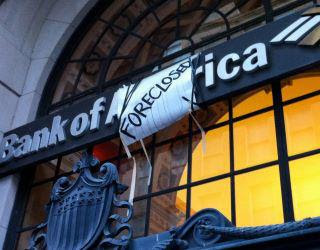 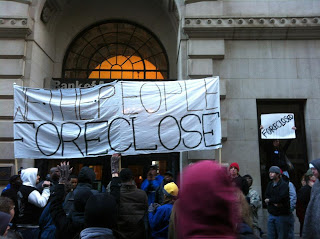 Armistice day marks the day that the major hostilities of World War I were formally ended at the 11th hour of the 11th day of the 11th month of 1918 with the German signing of the Armistice. Armistice day is a day meant to celebrate peace and reconciliation.

Over the years Armistice day has come to be called veterans day, and the focus has shifted from celebrating peace and reconciliation to honoring those who served in the armed services. It should be noted that Armistice day was never intended to be a day to celebrate war and nationalism.

Today I was proud that American Friends Service Committee has embraced the Occupation movement in Atlanta and around that world, I think they got the spirit of the day right.

Occupy Atlanta hosted a lunch for veterans in the park and it was quite a spread. Over fifty veterans attended, many of whom have been discarded by the same nation that beats the drum of war and shouts, "Support The Troops", when it's time to fight. May veterans don't find that "Support" when they return home. The fact is veterans make about 15% less annually then their non-veteran counter parts, one third of homeless people are veterans, only 12% of veterans find that their military service helps them get a job, 33% of female veterans report sexual assault while on duty, only 20% of veteran ever receive a four year degree, and 18 veterans commit suicide every week.

Before another war profiteer supporting politician or pundit beats the drum of war using the, "Support the Troops" jargon they should be forced to deal with the harsh realities most veterans of war live with everyday.

After Occupy Atlanta served lunch there was a veterans speak out. Several veterans, including Vietnam combat medic John Zientowski and Iraq Veteran Hector Barraza both made the case for a full scale foreclosure on America's wars to heavy applause from the crowd.

After the speak out Occupy Atlanta marched to Bank of America and held a foreclosure proceeding. The bank was foreclosed upon for a number a reasons including the misuse of billions of TAFT dollars from the American people, foreclosing on countless veterans, hidden bank fees for service men and women currently serving overseas, and being morally and ethically bankrupt. During the foreclosure proceedings, "foreclosed" signs were put up and the doors were locked. I'm told that the building will go up for sale this Monday on Craigslist.