Bloods and Crips Find Common Cause in Occupy Atlanta 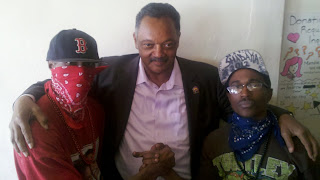 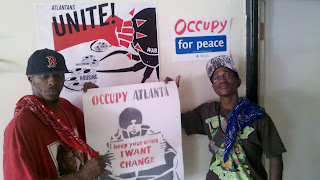 Sherrod Britton, 29, was initiated into the Bloods when he was 18 years old. He joined because he felt lost and wanted to be a part of something.

Sherrod was walking down peachtree street past Troy Davis three weeks ago and saw all the tents. "I wanted to know what was going on, so I stopped by,I haven't left since", said Sherrod.

Sherrod expressed feeling a deep connection to the message and process of Occupy Atlanta." I stayed for the common cause, speaking for the people. I feel strongly that we have the right to jobs, health care, and affordable higher education."

Around the same day Sherrod showed up Shabaka Addae Guillory, 20, saw a story on the news about Occupy Atlanta and had to see it for himself. Shabaka stated, "I knew this kind of movement was coming I just didn't know it would come so soon."

Shabaka and Sherrod both found a common cause in Occupy Atlanta, but they also share another commonality in their narrative.

Shabaka was recruited into the crips when he was 14 years old. "My parents were divorced, grandfather passed away, a lot of problems at school, and there was a lot of confusion at the time."

On Shabaka's first day at Occupy Atlanta he approached a group of folks doing an impromptu free style session and saw Sherrod. "I saw him in the park, saw his colors. There was no mean mug or rivalry because we realized that what's happening hear is so much bigger then gang rivalry", stated Shabaka.

"I let him sleep in my tent cause he didn't have one. We are connected through music, faith, and Occupy Atlanta", stated Sherrod.


Sherrod and Shabaka are now both very committed full time occupiers. Occupy Atlanta may have started as an act of civil disobedience designed to shine a light on the extreme wealth disparity in our city, country, and around the world. It's important to acknowledge that one of the beautiful byproducts of this new movement is the transformative experiences that arisen as a result of so many different people form different walks of life occupying a space together for a common cause.