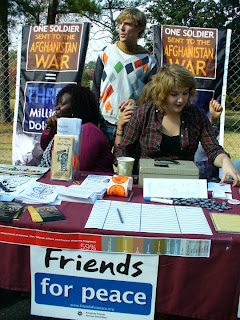 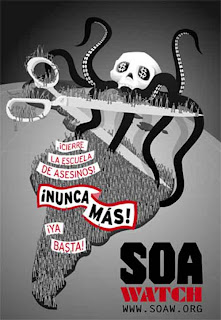 On November 18-20, 2011 the American Friends Service Committee will join thousands of social justice activists and organizations from across the Americas in occupying the main gates of Fort Benning, Georgia to call for an end to U.S. militarization and for the closure of the Western Hemisphere Institute for Security Cooperation, formerly the School of Americas.

The three-day convergence will include a massive rally, where thousands will occupy the main gates of the Fort Benning military base in order to transform it from a place that trains assassins to a place of initiation into political awareness. On Sunday, November 20, the chain-linked barbed wire fence will be transformed with images of the martyrs, crosses, stars and flowers into a memorial for the victims of SOA violence and U.S. intervention. Human rights activists will carry their protest onto the grounds of the military base, risking arrest and up to six months in federal prison. The mobilization will include speakers from the NAACP, the Sisters of Mercy, the Georgia Undocumented Youth Alliance (GUYA), torture survivors and human rights activists from Latin America as well as plenaries, workshops, concerts, strategy sessions and more.

“The SOA provides the military muscle to protect the greed of the 1% at the expense of the 99% throughout the Americas.” said Father Roy Bourgeois, the founder of SOA Watch. “The surge of social justice activism in the U.S. is fueling the call for the closure of this notorious institution.”

The SOA/WHINSEC is a U.S. taxpayer-funded military training school for Latin American soldiers, located at Fort Benning, Georgia. The school made headlines in 1996 when the Pentagon released training manuals used at the school that advocated torture, extortion and execution. Despite this shocking admission and hundreds of documented human rights abuses connected to soldiers trained at the school, no independent investigation into the training facility has ever taken place. SOA violence continues in Mexico, where 1/3 of the original members of the Zetas drug cartel were trained at the SOA, and where the U.S. is promoting military solutions to the drug problem. SOA violence continues in Colombia, which has sent more than 10,000 soldiers to train at the SOA, and where SOA graduates are involved with extrajudicial killings and other serious human rights violations. SOA violence continues in Honduras, where SOA graduates overthrew the democratically elected government in 2009. SOA violence continues in Guatemala, where SOA graduate Otto Pérez Molina just won the presidential elections, and throughout the Americas. In October 2011, Time Magazine published the article “Is It Time to Shutter the Americas' 'Coup Academy'?:” http://www.time.com/time/world/article/0,8599,2097124,00.html#ixzz1b9Rvmcbu

In August 2011, 69 Members of the House of Representatives delivered a letter to President Obama, calling on the President to shut down the Western Hemispheric Institute for Security Cooperation (WHINSEC), formerly the School of Americas (SOA) by executive order. The 69 Representatives include Representative John Lewis from Georgia, Representative Ron Paul from Texas and Representative James McGovern from Massachusetts. To read the letter, visit http://soaw.org/docs/ObamaLetter.pdf

On November 4, Representative McGovern introduced H.R. 3368, the Latin America Military Training Review Act, in the House of Representatives. The bill calls for the suspension of the SOA/ WHINSEC and an investigation into the connection between U.S. military training and human rights abuses in Latin America.

SOA Watch is a nonviolent grassroots movement that works for the closing the School of the Americas and a change in U.S. foreign policy - www.SOAW.org