Confronting the issue of bullying In Atlanta Area Schools 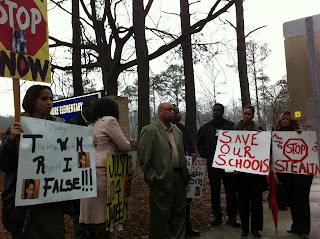 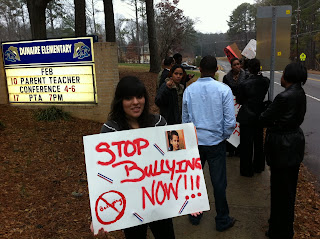 Almost a year ago Atlanta was shocked by the news that 11 year old Dunaire Elementary School student Jaheem Herrera had hung himself with a belt in his bedroom. It was a shocking scene to imagine, his mother and little sister discovering the body. Even more shocking is the realization that this young man was likely driven to take his own life by the constant bullying he experienced while at school.

Jaheem's mother, Masika Burmudez, had complained to the school eight separate times with no results. Apparently young Jaheem just stopped complaining about it after nothing was done. It's also rather surprising how the Dekalb school system chose to deal with Masika Burmudez after the death of her son. One would think a principle, a school board member, or any other person of conscious would have an absolute open door policy with a mother in her situation. Dekalb County basically refused to meet with Masika, and they also deny any wrong doing to this day.

Today being the last day of bullying awareness month, Masika and other members of ABC(Advocates on Behalf of Children) called for a press conference in front of Dunaire Elementary School. Much was said about Dekalb countie's accountability and root causes of bullying by several folks that had been asked to speak, and for something pulled together last minute media coverage was pretty good. Masika stated, "It’s a tragedy that DeKalb County still hasn’t acknowledged that my son was bullied at Dunaire, this school system has failed me and every parent but not being truthful about the events leading up to my son’s death. I have unfounded proof that my son was indeed bullied along with his peers at that school”

Bullying is basically the use of strength or status to infringe on someone else. While it is shocking to read about the recent wave of elementary age kids committing suicide to escape their tormentors, the fact that bullying in general is on the rise is sadly unsurprising. Children are like little sponges, soaking in all that they see and hear around them. This information is an important part of human development.

Even though sharing, self sacrifice, love, and tolerance are often talked about as values to strive for in our lives when, we look at those that lead our nation through the political process or through status in the market we see very different guiding principles in practice.

If there's anything that our culture teaches through action it's that we are committed to the use of force and status as a means to assert our will. In fact it is the systems of violence that our government puts it's highest economic priority, not diplomacy, not peace, no programs of social uplift. For example, we spend 59% of our federal budget on the military industrial complex, while only spending 4% on education. In Georgia we spend much more on each prisoner(by the way Ga has the highest percentage of citizens in the prison system per capita in the US) then we do on each student. These policies are created, supported, and perpetuated by the folks we call leaders.

They system we live in today, more then ever, almost forces children to confront their peers not with cooperation and collaboration, but with conquest and competition. It's no shock that young people may see publically destroying someone else's self worth as a legitimate means to build their own social capitol. It seems that it would be abnormal to perceive the realities of the global system we exist in today and value concepts like sharing, compromise, peace, and fairness even though those values do seem to come naturally for humans.

Masika Burmudez and the folks at ABC are planning several events to around the anniversary of young Jaheem Herrera's passing, we will be there.