Atlanta Stands In Solidarity With The People Of Egypt 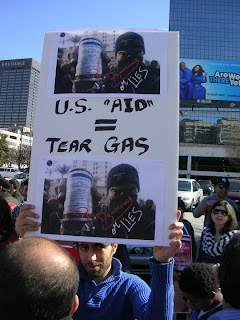 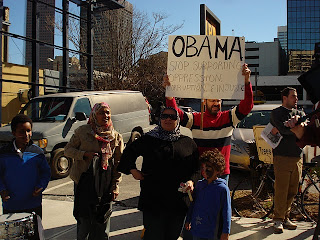 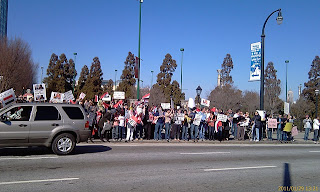 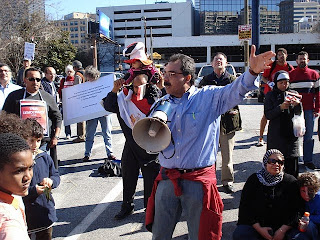 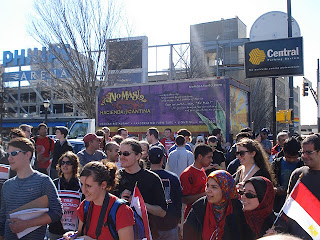 Today around the country, around the globe, demonstrations in solidarity with the people of Egypt took place and Atlanta was no exception.

Just days ago several Americans of Egyptian decent banded together to organize a demonstration outside of the CNN center. None of them had ever organized anything like it in the past. They had no experience writing press releases, sending them out, developing talking points, the legalities of holding a street demonstration, but that didn't stop them.

Over the course of just days this small group of passionate folks built a rather impressive, lively demonstration that drew out around 250 people and was covered by CNN, CNN Espanol, The Atlanta Journal Constitution, Atlanta Indy Media, several local TV stations and more.

The organizers talking points were simple and to the point:


Many in the crowd had direct connections to those that are in Egypt right now and fear for their loved one's safety. There was a mix of excitement over what seems to be an inevitable, seemingly spontaneous revolution, and concern for the clear human rights violations of the Egyptian government.

Since the internet and cell phone blackout in Egypt yesterday there have been reports of escalated violent clashes between protesters and police in Egypt, but there have also been reports of police officers laying down their weapons, refusing to fight their own communities, even joining the demonstrators.

AFSC's official statement on the unfolding situation in the Middle East and Africa came out Friday, "AFSC staff in the Middle East and Africa are following the news regarding the wave of demonstrations across the region. We add our prayers to those of many others around the world that there is no further loss of life. We also encourage those in power to listen to the young people who are expressing their aspirations and welcome their role."

Locally, here in Atlanta, we're excited to continue to work with and support the folks that organized today's rally. While one can not predict the conclusions of what has begun in Egypt, it is exciting to witness workers, students, and others demanding a fairer, more just society. It is exciting to see everyday people standing up to their government and demanding the right to self determination and rejecting governance which can only be forced upon a people by the barrel of a gun or tyrannical economic policies. It's exciting to be in Atlanta today, and be able to add our voice to the global choir....which seems to be getting louder. Can you hear it?