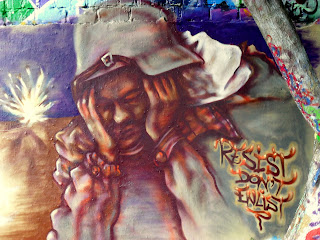 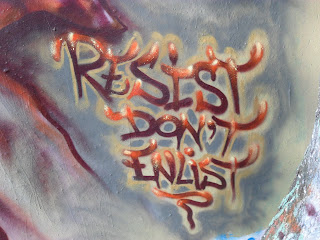 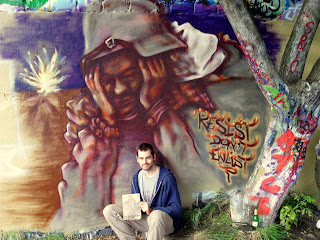 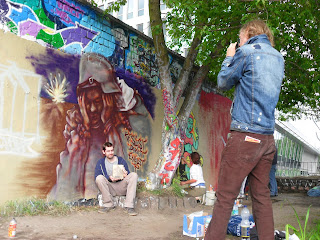 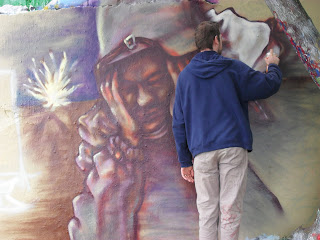 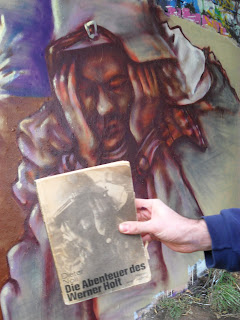 I knew that the topic of street art and graffiti would come up in Berlin for two reasons. One, it really does have some of the best street art in the world. Two, Shauna and Bjoern Vogel where hosting me. Shauna's a childhood friend, Bjoern is the extremely talented artist that Shauna married. Bjoern and I had gotten to know each other while he was living in Atlanta and had many online conversations with him about current events.

Bjoern and I pretty much started talking collaborative possibilities immediately, as I am a budding street artist myself. We talked about the possibility of doing some sort of global "Cost of War" campaign that would provide an education on the human and economic(one in the same) cost of war in different countries through art. The possibilities really caught my mind on fire as we both know people in dozens of major cites.

We did decide to look at some short term collaborative possibilities and came up with several concepts for murals to paint in Berlin. We talked about exploring several themes, we wanted to explore the similarities of German soldiers and the Afghan fighters that they are trained to kill, the economic injustices in the German Enlistment process, and how much money is taken from German communities and spent on war(billions).

We jointly designed a pretty awesome mural that will go up in the next few months and today Bjoern painted, in a legal space, a pretty great mural that's based on the classic German anti-war book, "Die Abenteuer des Werner Holt". Bjoern decided to include what has become one of the slogans we often use in the Atlanta Truth in Military Recruitment movement, "Resist Don't Enlist" as a homage to our work in Atlanta and a message to the Berlin community.

In Germany young men have three choices after they turn 18, military service, social service, or college. Many lower income young men choose military service because they are told that it will help them develop a career in the military or learn job skills training, these promises often don't become realized.

Germany is in an economic crisis. Over 15% or Berlin is unemployed yet billions continue to fall out of the sky for war funding. Recently the German President, Horst Kohler, was forced to resign after making several bold statements against Germany's involvement in Iraq and Afghanistan. This makes it clear that while there are many who pay for German's involvement in America's war(including the over 300 dead soldiers and countless injured), there are a select few that do profit from it.

With President Obama's recent request for Germany to commit an additional 1000 troops to the Afghanistan, it seems like a good time to be creating art in Berlin that spark conversation about the issue. I look forward to further collaborations with Bjoern and many of the other amazing artist from my new favorite city, Berlin!