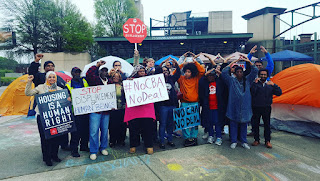 After the Braves announced that they would be leaving Turner Field residents of Summerhill, Peoplestown, Pittsburgh, and Mechanicsville began meeting to discuss what would become of the almost 80 acres.

Over the course of almost three years over 1700 residents and countless experts gave input on a Community Benefits Agreement that would ensure that the voice of the community would be included in any development and that whatever ended up at Turner Field wouldn't end up displacing long term residents that are loved and needed in their community.

Since Carter Development and GSU has purchased the land they have not only refused to meet with residents, they have resorted to spreading lies through the media about residents intentions, including implying that all residents want is a cash payout, such a request has never happened. 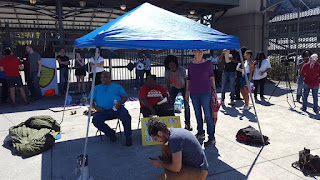 Residents have drawn a line in the sand and simply will not allow GSU, Carter, or any other developer to extract wealth from a community that has suffered through so many bad developments over the years without allowing residents to have a voice and a binding agreement about how their community is developed. 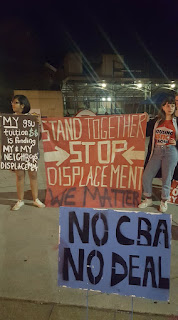 The Neighborhoods surrounding Turner Field have been plagued with mega developments that have brought countless broken promises of economic development. 50 years ago Mechanicsville, Summerhill, Peoplestown, and Pittsburgh were thriving communities. It was a place where one could buy fresh food, go to the doctor, enjoy the theatre, attend a decent school, and enjoy a walkable community. Interstate 75/85, the Fulton County Stadium, the Olympic stadium, and Turner Field have all had detrimental effects on the surrounding neighborhoods.

Each of these developments ended up displacing residents by the thousands and destroying small business in the area.

That’s why residents and GSU students are taking a stand by organizing a Tent City, and we invite you to join! Follow the Turner Field Community Benefits Coalition and the Housing Justice League on Facebook for updates!

You can support the tent city in several ways! 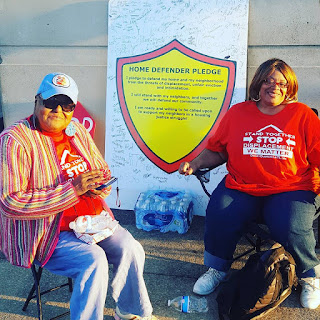 2. Come down and spend time at the Tent City, 755 Hank Aaron drive, it's a 24 hour occupation and the more people present the more powerful we are!

3. There are a lot of expenses and you can help by making a donation and spreading the word! Click here to donate!
Posted by Atlanta Economic Justice Program/AFSC at 4:59 PM