Will the Chinese Be Evicted From DC Chinatown? 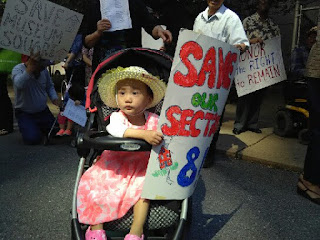 Tenant leaders from across the US joined Museum Square Tenants today to support tenants at Museum Square in DC’s Chinatown facing displacement to make way for luxury condos. Over 100 tenants came together for the rally, which was held outside the DC Chinatown complex.

Approximately half of Chinatown’s remaining Chinese population lives in the 302-¬unit Museum Square building. Most tenants are Chinese immigrants; the rest are African¬American. The owner plans to tear down Museum Square to build 850 high rise luxury condos. 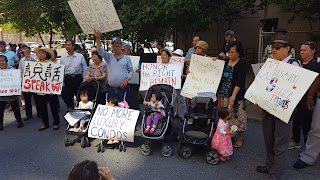 Are the Chinese being evicted from DC Chinatown? That is the question and the concerned shared by many long term residents of the community. “I don’t call it Chinatown anymore I call it downtown; I don’t know why they have Chinese letters on all the buildings. I remember when we used to be able to walk down H street to get rice, vegetables, and everything else we need. Now most Chinese business has been priced out” stated Museum Square tenant leader Jenny Tang. 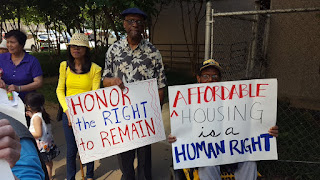 Last October, the owner declined to renew the federal subsidy contract that kept the building affordable for low income tenants Under federal law, tenants were issued “Enhanced Vouchers” by HUD which provide them a legal Right to Remain in their homes.

Initially, the owner refused to accept the vouchers, but relented under pressure from Museum Square tenants and their allies. Although the owner now accepts vouchers, both the owner and the DC Housing Authority continue to encourage tenants to move.

HUD officials on Monday refused to change their policy which recognizes a tenant's right to remain but requires the tenants to personally enforce that right. This forces low-¬income tenants to contend with well financed real estate developers and owners.

“Just because the owner says ‘you have to move’ does not mean you have to move. Right now, in my heart, it means ‘work as a team and fight,’” said Jasmine Tang, a ten year old tenant leader who lives in Museum Square. “The owner does not know how many people and children he can hurt by just demolishing the building.” 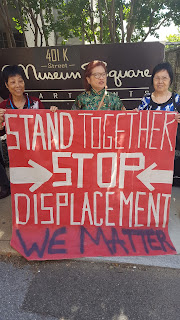 "The struggle of Museum Square tenants has put a spotlight on the issues faced by low income tenants and communities of color across the nation,” commented NAHT President Ed Lucas.
An on-line petition was created to build pressure to stop the displacement of the Museum Square tenant: https://start2.occupyourhomes.org/petitions/bush-company-stop-the-displacement-of-300-families?bucket=&source=twitter-share-button