On Saturday, March 19th people sprang into action to prevent displacement in Peoplestown. The day began with a bus tour of neighborhoods that will be affected by the Turner Field development deal and ended with the Peoplestown Rally and March Against Displacement. The Bus Tour was made possible by support from the Metro Atlanta Democratic Socialists of America and Peoplestown Revitalization Corporation. We are also grateful we had students and professors from Georgia State and Georgia Tech with us on the Tour. 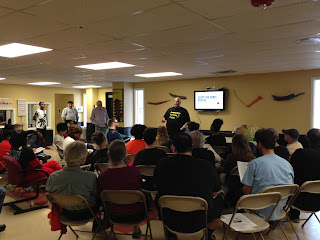 We started the day off with introductions to the work that is happening around Housing Justice in the Peoplestown, Mechanicsville and Pittsburgh neighborhoods. Columbus Ward (pictured to the left) discussed his work in Peoplestown with the Peoplestown Revitalization Corporation throughout the years. There were discussions around previous development deals in the neighborhoods and how that has affected the neighborhoods today. The presentations gave insight into what people would be seeing on the tour. After presentations, we embarked on the Bus Tour. 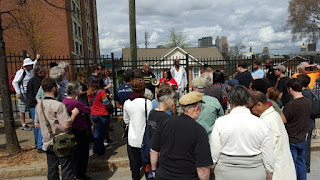 The next stop on the Tour was City Views at Rosa Burney in Mechanicsville. Deborah Arnold shared her experience organizing tenants to ensure that City Views remained and remains affordable and that everyone living at City Views has a good, quality standard of living.

The Peace by Piece House in Pittsburgh was the third stop on the Bus Tour. Peace by Piece is an AFSC program thats mission is to support and mobilize Black youth and young adults through political education and organizing in order to realize sustainable, sovereign and equitable communities rooted in Black love.  Joel Dickerson, and Khadijah Austin, both from Atlanta, spoke about their experience with renovating a house and community garden in Pittsburgh. The house and the garden are going to act as Peace by Piece Atlanta's hub. Farajii Muhammad spoke about the Peace by Piece and his experience organizing in Baltimore, Maryland. Khadijah gave a tour of the house and showed recent renovations. Joel gave a tour of the garden next door. By the end of the day 17 people signed up to help volunteer with renovations at the house.

As we marched around the block, we stopped and placed "rezoned for gentrification" signs in lots where houses used to stand. All of the houses between Tanya's House and the Darden's house have been bulldozed. Throughout the march we chanted and sang to let our voices be know to the neighborhood that "we shall not be moved."

The Rally left Miss Jackson, Tanya Washington, and Mr. and Mrs. Darden feeling energized, supported, and filled with a great positive energy. We encourage folks to sign and share their online petition. Big Thanks to all who participated! #peoplestownwillnotgodown
Posted by Atlanta Economic Justice Program/AFSC at 4:28 PM