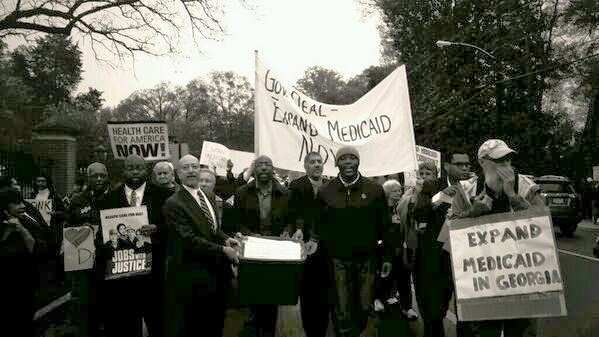 No Mr. Governor, we will not go around back. While you might think it is hard to get hundreds of people to agree instantaneously, for this question the answer was swift and unanimous. We, the people, assembled in front of the Governor's Mansion, the People’s House, would not leave the front of the mansion and deliver the wishes of 50,000 people to the back door of our house.

Instead, we stood, in the rain. Packing the street in front of the mansion we waited for the opportunity to deliver the message from 50,000 of our fellow Georgians. Expand Medicaid Now. Do it without delay and help stop 10 people from dying everyday. We stood for hours, hundreds of us, just waiting to have our voices heard. We were there to tell Governor Deal, that all lives matter; that is what we chanted as we lined the streets, Expand Medicaid Now; All Lives Matter, we chanted this because Governor Deal has put politics before the people he is sworn to protect. 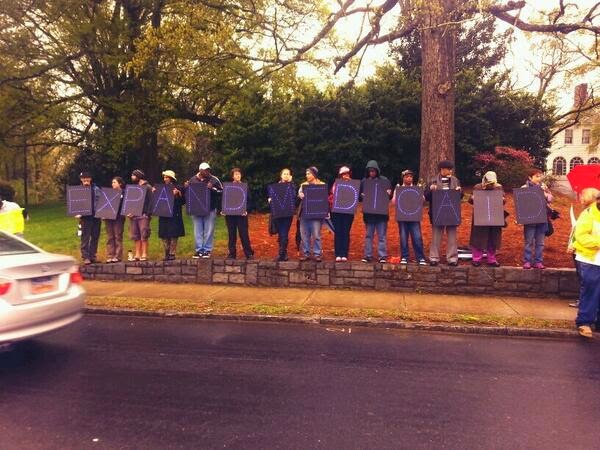 We were there to deliver our message because we believe that the 650,000 people in the Medicaid gap matter. We believe that the estimated 10 people who will die every day matter. So we lined the streets and marched up to the gate to demand to be heard. Acception our  petition. Accept the voice of 50,000 people in Georgia who believe that all lives matter. In the end we were denied. We came in good faith to be received by a public servant and instead we were refused. We were turned away from the front gate and told we could deliver our petition around back. Use the back door of our house? That was not an option.So, there the gate stood. Blocking our path to the People’s House much in the same way that Governor Deal is blocking health care to 650,000 people. 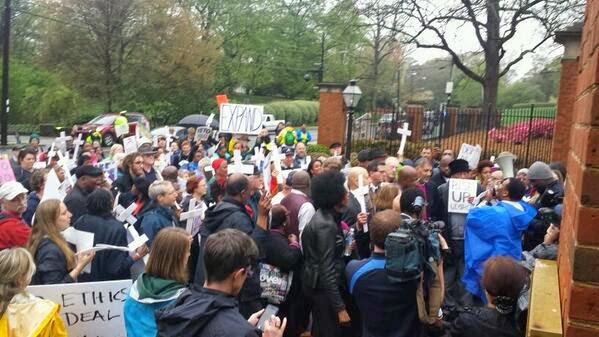 Refusing to acquiesce we instead decided to converge on a different door. Before we left the mansion we placed crosses in the fench, each one representing a Georgians that has already needlessly died without Medicaid expansion. The next morning we again met. Faith and community leaders, old and young, black and white, gay and straight, we met at the Governor's office at the Capitol. We came together in front of his office door, holding hands we prayed; that Governor Deal would open his heart and stop letting Georgian’s suffer and die needlessly at his hand. Refusing to meet us in person we were instead able to deliver the messages of 50,000 people to his office staff. We are all different types of people, from all different walks of life, but our message was the same. Expand Medicaid Now. All Lives Matter.

Make your voice count. Join us at the Capital, 4pm April 21st.

Posted by Atlanta Economic Justice Program/AFSC at 10:37 AM