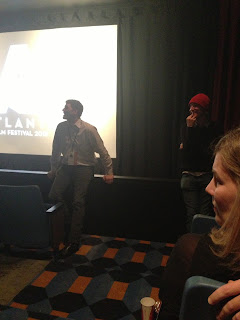 Today I had the honor to host a film screening of, "As Goes Janesville" at the Plaza Theater as part of the Atlanta Film Festival. The film tells the story of American austerity measures through the lives of Janesville, Wisconsin residents after a GM plant closes and right before Scott Walker is elected.

Brad Lichtenstein, the director, does an amazing good pulling us into the lives of five main characters, each suffering consequences of economic crisis.

First GM shuts down Janesville’s century-old plant, causing mass layoffs and exile in search of work. Then newly elected governor Scott Walker ignites a firestorm by introducing a bill to end collective bargaining, unleashing a fury of protest and sparking a recall election.
We tell the epic tale from the inside, following 3 years in the lives of laid off workers trying to reinvent themselves; business leaders aligned with the Governor to promote a pro business agenda that they believe will woo new companies to town, and a state senator caught in the middle, trying to bring peace to his warring state and protect workers’ rights. As Goes Janesville, so goes America, a country mired in polarization and falling short of the American Dream.

Posted by Atlanta Economic Justice Program/AFSC at 4:28 AM