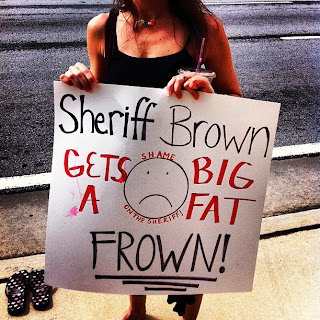 Earlier today several dozen members of the metro Atlanta community converged at DeKalb County Sheriff Thomas Brown's office to deliver him a People's Citation for his actions against DeKalb County Resident Chris Frazer and her family. 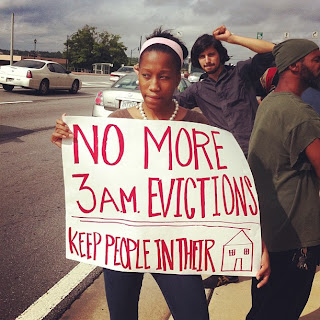 On May 2nd Sheriff Brown and 40 of his armed officers stormed the Frazer home and evicted Chris along with her 3 year old grandson, 25 year old daughter, and her 85 year old mother. 18 years of their lives in that home were tossed in the yard like trash while members of the community watched helplessly. Many tried to help pick up Chris's belongings, but where threatened with arrest for doing so.

Last week, after much negative press, Sheriff Thomas Brown reached out to several organizers and asked what he could do to de-escalate the conflict between Occupy Atlanta, Chris Frazer, and his office. Sheriff Brown offered to accept a people's citation from the community, face Chris Frazer face to face and apologize for the pain he caused her, and contribute to her legal fees as she continues to fight Investors One Corporation.

With some skepticism, Chris Frazer agreed. As an organizer working with Chris, I was honestly excited to de-escalate with the Sheriff's office, as it feels like our energy really should be focused on the extremely shady Investors One Corporation.

Things did not play out the way any of us expected. Joe Beasley, Attorney Joshua Davis, Chris Frazer, and myself were allowed to meet with the Sheriff in his lobby while around 30 others watched from outside the glass walls. Sheriff Brown's face had no signs of reconciliation on it. 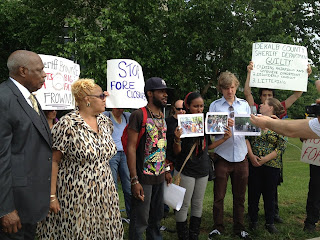 The first sign that he was backing down on his word was that he refused any media admittance to the meeting, which we had agreed he would allow. The Sheriff began to attempt to apologize, but it appeared that he just couldn't resist sharing his true remorseless feelings. At one point, as Chris Frazer had begun to weep, Sheriff Brown simply stated, "If I had to do it over again, with all the information I have now, I wouldn't have done anything differently". 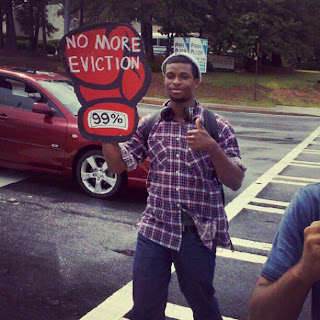 In a sense Chris Frazer was forced to relive the bullying she experienced under the lash of Sheriff Brown a second time. Those of us in the room found ourselves in total bewilderment, as just days earlier Sheriff Brown had reached out to us in an attempt to make amends for the 3 a.m eviction.

After the meeting several folks, including myself, where accosted by an overwhelming number of Sheriff's officers who harassed us, demanding to take pictures of every activist who showed up, even forcing one person to show them all his tattoos.


Today was a shameful day for anyone that cares about justice in DeKalb County. We can't afford a Sheriff that disrespects folks in the community like Thomas Brown continues to.

Tomorrow(6/12) We plan to join Chris Frazer at the DeKalb County Commissioners meeting at 9am at 1300 commerce drive in the Maloof auditorium. Please come if you can.