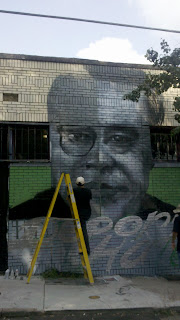 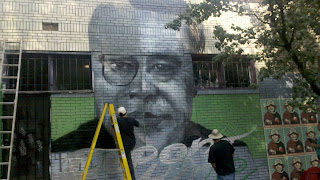 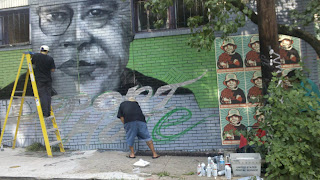 Who's seen the, "We Are Human" posters around the Atl? There's been a crew of LA artist and activists traveling around the country trying to spread the love and deport the hate laced immigration legislation that has been introduced in dozens of states.

I was excited to be able to get up to speed with sixth son organizer Mario Rocha about their visit to Georgia while their crew was working on an amazing new mural in the heart of little 5 Points. The mural's done, ya'll need to go check it out. It's at the corner of Euclid and Colquitt where the Pink Elephants used to be.

Sadly the phone video I shot is half sideways, but take a look anyway:

There was a street poet that was hanging out during the mural painting, he offered to spit a quick freestyle about AFSC, here it is filmed in amazing sideways vision:


We hope to have Mario's crew back out in the next few months. They said they would be excited to through more murals and posters up if anyone wants to donate a wall or two.