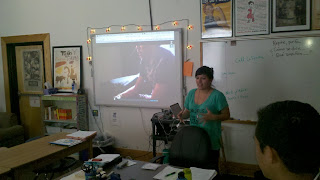 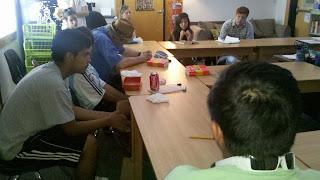 After this past Sunday's Food For Thought Benefit, where one of our Migrant Youth Voices short film was shown, we we approached by a Paideia high school student who wanted to show the short film at his school and have a facilitated discussion about immigration reform, racism, and the coming realities of HB87.

We were surprised that there were any high schools still in session, but we were happy make the film screening happen on short notice. We want to get out to as many school, churches, homes, and community centers for film screenings as possible. The short notice event also gave one of our Migrant Youth Voice(MYV) participants the opportunity to polish his public speaking skills a bit more. After the film screen our MYV participant(who was featured in the film) spoke and answered questions for about 30 minutes.

It's been unexplainable inspiring to witness the journey many of the Migrant Youth Voices participants have taken in a fairly short period of time. From living with their secret, to sharing their stories with others who have been there, to sharing their story on film(safely), to speaking publicly. It's clear that there will be several emerging community leaders from this crew. Perhaps that is the silver lining that the passage of HB87 has brought, a new unstoppable force that will unquestionable prevail in the long run.


Contact us if you're interested in hosting a film screening in your community. The films are very short and we can set up a panel to follow. It's a great way to start a conversation.