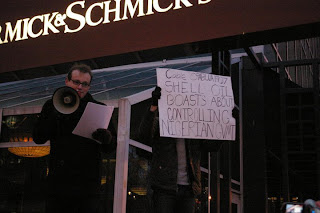 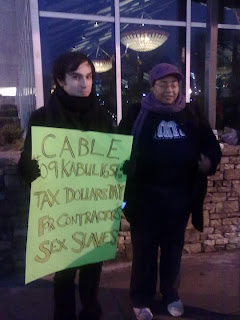 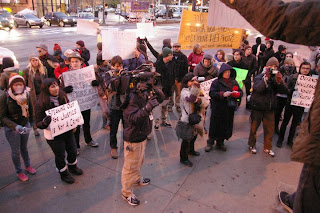 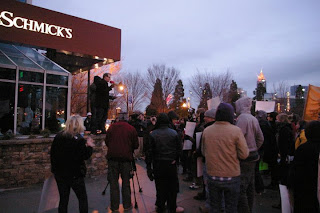 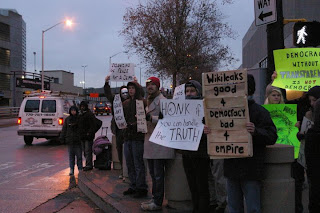 Less then a week ago a groups of Atlanta activist from different organizations got together at the International Action Center Atlanta office to respond to the arrest of Wikileaks founder Julian Assange. They decided to a rally against not only the repression against Assange, the arrest of Private Bradley Manning, but the recent crackdown against anti-war organizers in Chicago by the FBI as well.

Around 100 or so demonstrators showed up in yesterday, in front of the CNN center. The freezing cold icy streets didn't stop folks from coming out and making noise.

Several folks actually wrote parts of the recently leaked cables on poster board and at one point, Tom Lorre with The Progressive Student Alliance at GSU, began to read parts of the cables through a megaphone.

People all over the world have expressed outrage over the crackdown on whistle blower Bradely Manning and Wikileaks founder Julian Assange. Both appear to be guilty of nothing more than tell the truth, exposing government lies. The question on many peoples minds now is what does the exposure of these lies mean? Where do we go from here?

Many of the lies exposed through Wikileaks have serious implications about war, exploitation of economically depressed nations, and really bad behavior of multi national corporations.

Today it has been reported that Julian Assange has been released on bail, but will remain under house arrest.