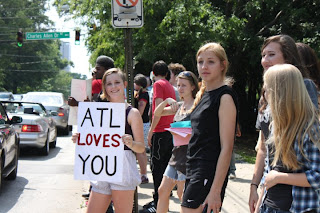 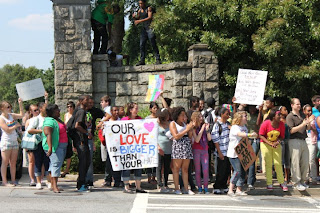 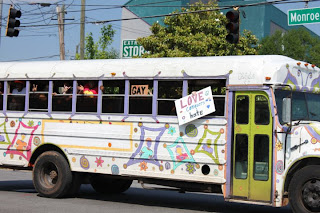 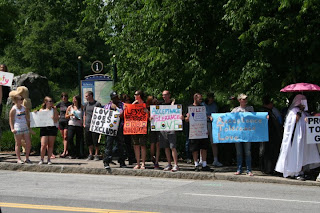 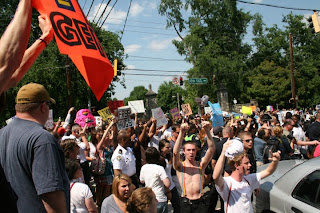 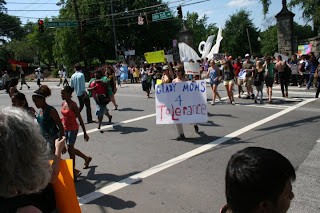 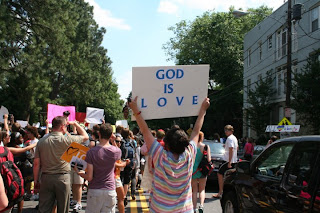 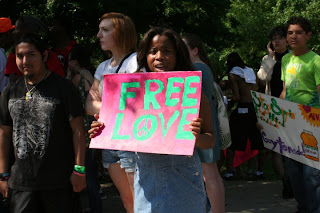 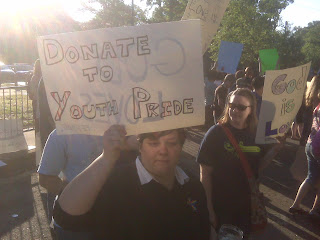 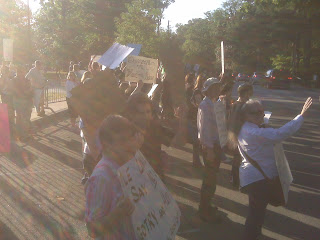 Wow, I must say that today was an emotional rollercoaster for me. I suppose that I could say that I had almost every emotional response I've ever had from a street action over the years rolled up in one day. The plan for the day was to support the student organizing efforts to counter picket the Westboro Baptist Church at two Atlanta area high schools, Druid Hills and Grady.

The Druid Hills picket was scheduled from 7:40-8:10am, right as students are showing up to school. Several of the students we had been working with had told us that the principle of the school had repeatedly told them that if they were seen joining the counter demonstration that they would be escorted by the police into the school and possibly arrested. I personally spoke with the principle and she confirmed this. My feeling is that her motive was to protect her students from physical and emotional injury but that doesn't justify ignoring their civil liberties, their right to confront the hate that had been brought to their community. Not only does the first amendment extend to public school property, the faculty has no right to attempt to control their students bodies off the school property before classes start.

I was supposed to meet several dozen folks, including members of the press, at the school at 7:30am. Due to the intense traffic created by the police presence I did not get their till almost 8am. Most of the folks I was supposed to meet didn't make it in time. For the sixty of us that did make it we were confronted with perhaps the most unnecessary show of police force that I have ever seen in my life. That's a pretty bold statement for me. I've been to several international demonstrations, Including the G-8 in 2004, where we had tanks and missile launchers roaming through low income neighborhoods.

To protect seven WBC members the police created a free speech zone for counter demonstrators. I spotted dozens of officers in head to toe bullet proof suits, there were machine guns, at least six tears gas machine guns, rubber bullet shot guns, riot shields, all totally inappropriate for something of this size.

For those that braved all those obstacles we did make the best of it. Passers by were all very happy to see the WBC wasn't the only group with a message that day. A jar was passed to raise money for Youth Pride, and students were seen cheering us on from inside their classrooms. As we left several students poked their heads out from their classroom trailers and gave us all a woot-woot.

The next stop was what we had all decided was going to be the finale, Grady High School. One big difference between Grady and the other two high schools was that the Grady students had controlled the conversation about how the campus was going to respond as opposed to the faculty(though faculty did attempt to extend their control beyond legal limits).

Grady student, Becca Daniels, along with several of her peers, had coined the counter demonstration, "Acceptance, Love, Tolerance" or, "ATL". Becca and crew had worked hard to instill a spirit of love and non-violence into the demonstration. They had also done a lot of prep work. Creating stencils for signs and tee shirts, developing a list of organizations to raise money for, and getting permission to use Piedmont park.

I showed up 45 minutes early with banners\signs from the art party that we hosted earlier that week. We also brought big donation buckets and leaflets to pass out to folks who may not understand what was happening or what we were raising money for.

By 3pm there was around 100 people there. By the time Grady High school let out the WBC had set up the picket. Grady faculty attempted to stop their students from leaving the campus but they simply couldn't hold them back. Grady students were going to express themselves regardless of the consequences. By the time 3:30 rolled around there was around 600 people lining the streets with messages of love and tolerance. We had folks walking up and down the crowd selling the shirts the Grady students had made and asking folks to make donations to:

Grady students were joined by hundreds of other students and community supporters. The crowd got so big that it surged into tenth street, effectively shutting it down at times. When the WBC decided that they had enough and started packing up hundreds followed them to their car to make sure they left. After WBC left it was clear that people were going no where. The Red Dog police unit, infamous for their aggressive behavior towards all things homosexual, made several attempts to clear the crowd. Eventually they claimed that there could be a bomb in the park and that everyone had to leave. The crowd simply decided to take to Monroe and 10th. The crowd of mostly students and some AFSC folks stuck around till almost 7pm.

AFSC really had three goals in mind when we decided to organize around the WBC Atlanta visit.
1. To support youth and encourage youth organizing

2. To create awareness around hate crimes and homophobia

3. To help raise money for the very causes that the WBC objects to.

Seeing things through the lens of our goals I can honestly say that the WBC's visit was a blessing. Not only did we get to see amazing young people, like Becca Daniels and her peers, step and lead their campus, we had the opportunity to lead a workshop on confronting hate at the Horizons school, and create conversations all over the city about the homophobia and intolerance that exists in our community everyday. Groups like the WBC represent the fringes of public opinion in America, but it should be noted that when you take a short walk away from the edges of those fringes we find all kinds of nasty beliefs and fears rooted within our hearts. This week created opportunities to talk about the roots of these beliefs, and perhaps make steps to uproot some of them. We also raised close to $1000. over the course of two days, the final number will be in by this weekend.

Thanks to Horizons school, Grady Students and Countless others Atlanta truly did confront hate with Love, and If you ask me, Atlanta won:)

A walk through the crowd.

More of the crowd.