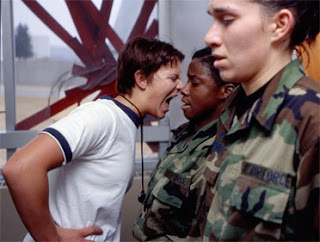 Because of No Child Left Behind, all public high school students' contact information is sent to military recruiters by default, without their knowledge or consent. Students can technically opt out of this, but they are not informed of that fact so most don't know how to do it, or even that they can at all, and so it doesn't happen by the deadline. Their private information is handed over--then they start getting call after call from military recruiters, sometimes daily.

HB 567, the Student Parent Privacy Act, would allow students an opportunity to opt out of having their info sent to recruiters. The simple bill, only a few paragraphs long, would require schools to notify students and parents that their info will be sent to recruiters unless they choose to opt out. On the same form, they could indicate their wish to opt out; they could then return the form to the school, which would forward it to the board of education, causing those students' info to be kept private. The bill was introduced in both the state House and state Senate this week and is currently in the Education Committee of the house and the Education and Youth committee of the Senate.

It is a violation of privacy to hand over minors' contact information, essentially to advertizers, who will then pester them nonstop.

Please call your state representative and state senator to tell them to support HB 567. You can go to Congress.org and type in your address to find your state legislators' contact information. If your legislators start hearing from their own constituents it will make a huge difference! The bill is so common sense, it would be hard for any legislator, Republican or Democrat, to oppose: how can you object to informing people before giving out their phone numbers?

Please call your legislators and urge them to support HB 567. Here's an example of what you could say:

"I'm a constituent of ________, calling to urge them to support HB 567, the Student Parent Privacy Act. The bill would prevent students' contact information from being given to military recruiters without their knowledge or consent. It is important to protect minors' privacy. It would be a simple matter for schools to send a form home with students giving them this important notice and allowing them an easy way to control their private information. This bill is just common sense. Can I count on him/her to vote yes on HB 567?"

If each legislator gets even a few calls from their own constituents, that will be a huge step toward getting this bill passed.

Below is a list of the phone numbers of every member of the Education committees of the house and senate. They are supposed to represent the entire state when acting as committee members, so they need to hear from you too! Pick one on the list or call a few:

Congress.org: get your legislators' contact info.
Read the bill on the legislature's website.
Posted by Atlanta Economic Justice Program/AFSC at 7:36 PM