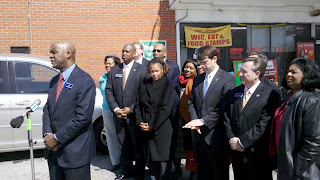 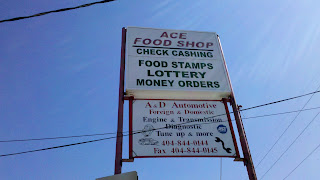 Today Senate Democrats held a press conference outside of the Ace Food Shop in Bankhead to denounce the Recent HOPE cuts that passed through the Senate this week. Senate Minority Leader Robert Brown(who informed me today that he's a former AFSC staffer) said, "We will not accept a HOPE scholarship that forces Bankhead to pay for Buckhead".

Stores like Ace Food Store make a sizable percentage of their revenue from lottery sales, with most of their costumers being low income African Americans. Senator Emmanuel Jones, who grew up near the Ace Food Store, stated, "This community is good enough lay down lots of hard earned cash on the lottery, but not good enough to receive any of the benefits?"

Democrats made it clear that the fight isn't over. They plan to introduce legislation to repeal the changes to HOPE the day that Governor Deal signs it, and they committed to taking the case to the people of Georgia. "We believe that when the people of Georgia realize what's been done they'll be outraged" said Senator Brown, adding, "We're not just going to rely on the legislative process here, it's time we take this to the street."

Senator Jason Carter also articulated that if the Georgia Lottery was not restructured that with in ten years it would only cover 20% of HOPE. He also stated, "There's money in the reserve fund to cover all students who are already enrolled in the HOPE scholarship program until they graduate, so we don't have to break Georgia's promise to them."

Ace Food Store was an interesting backdrop to the Press event. Under Governor Deals dismantling of HOPE it's stores like Ace that will drive millions of dollars into the education fund that would end up paying for wealthy kids to attend Georgia Tech(which is about a mile from Ace) while ensuring kids in low income neighborhoods, like Bankhead, will have little accessibility to HOPE.

"HOPE should not be hopeless in this community." stated Senator Jones. "We need HOPE to be available to those that need it most".