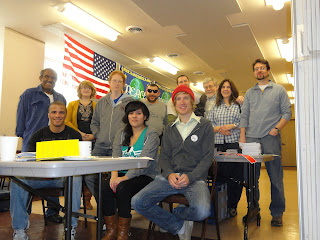 On this past Saturday Members of the Georgia Peace and Justice Coalition(GPJC) met in Macon to discuss a strategy to re-energize organizers outside the Atlanta metro area.

Before the Obama campaign took off GPJC had dozens of rural groups that were active. Groups hosted weekly demonstrations against the wars in Iraq and Afghanistan, they participated in several statewide peace and justice tours, and played key roles in legislative work.

Three years after the historic Obama election our country spends more money on the Military industrial complex then every, the wars in Iraq and Afghanistan continue, torture is still an excepted practice, Guantanamo prison camp has yet to shut down, and nothing has been done to address the growing cancer of poverty. The cup is looking half empty.

So Saturday we had folks from Macon, Augusta, Aiken, Jonesboro, Eastman, and Atlanta come together to make a plan. Over the next few months GPJC will begin the hard work of rebuilding a statewide base in every community across our great state. When the call come we hope you're there to answer.