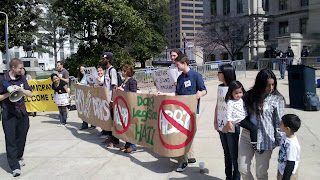 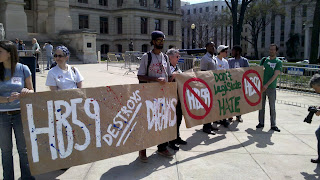 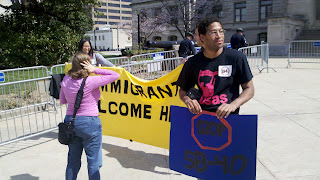 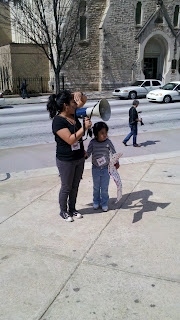 In a sad historic vote the Georgia Senate passed SB 40. The bill has been know by many as an Arizona copy cat law.

The bill signifies a new chapter in Georgia's legacy of hate and discrimination. SB 40 will discard thousands of human beings that have helped build Georgia's infrastructure, grow our crops, and do most of Georgia's dirty work.

Most economist predict that SB40 will have a devastating effect on Georgia's struggling economy. The Georgia Association of Latino Elected Officials stated,

"Georgia’s economy is at stake. HB 87 and SB 40 would impact the heart of Georgia’s economy: its agricultural industry, tourism and convention business, and foreign investment. Georgia’s leading industry is agriculture, which generates $65 billion annually toward the State’s economy and employs one out of every seven residents. It is estimated that 50-70% of our nation’s agricultural workforce is made up of undocumented immigrants. We commend the Georgia Farm Bureau for voicing its concern over a copycat Arizona law.

The tourism and convention business is the State’s second largest industry and has a total economic impact of about $34.8 billion. It is estimated that Arizona has lost over $140 million dollars on lost tourism and convention business as a direct result of the passage of its controversial law. Georgia cannot afford this type of loss. Georgia could potentially have a loss far greater than Arizona’s because Georgia is the home of many multi-national corporations, has the world’s busiest airport, has a thirst for expanding international trade."

But a bill being a bad deal for Georgian's didn't stop Senate from letting this one pass.

Outside the capitol, during the debate on the bill, 30-40 folks rallied against SB40. I had the honor of carrying several banners that youth involved with our migrant youth voice project had painted the day before. They weren't able to attend themselves because they're high school students, but they wanted to have a voice. One of them, Javier, was actually able to leave class for a few minutes to do a radio interview on 89.3.

About 20 minutes after the Senate voted to pass SB40 I received a phone call from one of our youth. His voice was shaky, I could tell something was wrong. He told me that his mother was moving the family to Houston because the laws passing here make them all unsafe. I can't think of any young person who deserves a future without bureaucratic, xenophobic obstacles more than this young man...yet I had little to say to him.

I found it ironic that just the day before this young man had bought an, "I Love ATL" shirt from a down town vendor after eating at the Hard Rock Cafe. He's an amazing guitar player and a rock and roll aficionado and the Hard Rock was a really great experience for him. I could see the doors of imagination opening up in his mind as he looked and took pictures of every piece of rock and roll history in the restaurant. He's just the kind of kid this city needs, smart, passionate, altruistic, and creative. I wish I could tell him that ATL loves him back, but today I couldn't.

I can't fathom any other reason for the passing of SB40 them pure racism.

Now more then ever we need folks off the sidelines. We need folks to go beyond agreeing with us, we need you to stand with us, organize with us.

Governor Deal has the power to veto this bill. We recommend you jam his office line, let his staff know this is unacceptable! That we don't want Jim Crow back in Georgia.

I'd also like to invite folks to come out to a few demonstrations over the next two weeks.