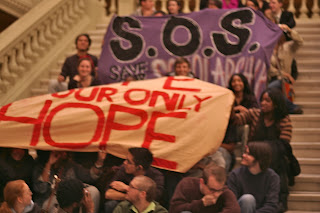 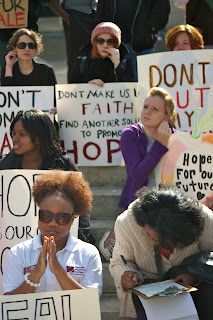 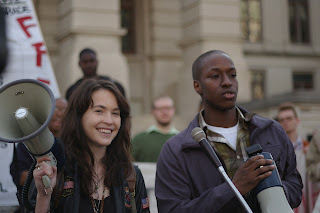 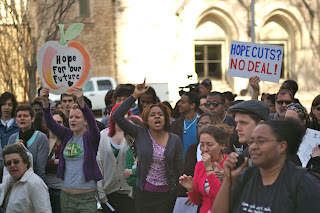 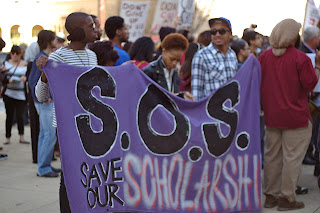 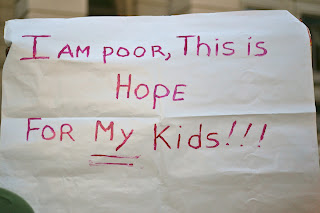 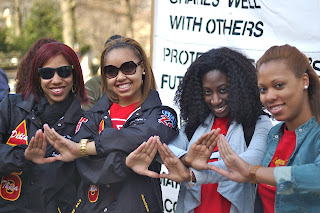 In an action initiated by Georgia Students for Public Higher Education, 250 college and high school students marched to the capital steps to demand a halt to Governor Deal's purposed cuts to the HOPE scholarship and pre-k programs funded by the Georgia lottery.

Students held banners that read, "Don't Defund Our Future", "Keep HOPE Alive", "Students Are Not ATMS", among others.

After the rally students stormed the capitol. After being told they could not hold signs or chant they proceeded to mark their messages on their bodies using sharpies, they stood their ground. Students attended the higher education Senate hearing on HOP/Pre-k hearing later in the day, many of them spoke to their concerns. At one point a dozen cops attempted to walk out several of the students at which point Senator Vincent Fort hoped up and told police that if they were arresting anybody then they should start with him.

Deal’s cuts include the following:
It's pretty clear that these cuts will hurt low income families more than anyone. We are already being flooded with calls from parents that know their children will be priced out of a college education. It seem the only ones that are understanding of the cuts are those that can find a way to pay for the price increase.

When your choice is food/heat or an education harsh realities begin to set in.


Our society seems to have no problem over spending when it comes to the systems of violence and oppression that create the largest tax burdens we face, and produce bleak outcomes for our future. 59% of our federal budget goes to the military industrial complex and on a state level the mass incarceration of non-violent drug offenders has placed tax payers in a position where we spend a significant amount more on each prisoner then we do each student. This despite the fact that the treatment of addiction has overwhelmingly been proven cheaper and much more effective.

What I keep reading in the mainstream press, and even hearing on the street, is that there doesn't seem to be any other option. Governor Deal has attempted to paint himself as the savior of HOPE. Pricing out poor folks isn't the only option. I've heard several ideas pitched to save hope. I personally have pitched ideas to Georgia legislators, Jason Carter has put out alternative ideas. Some of the better ones I've heard are:

There are more ideas out there, most of them are better then Governor Deal's proposal which I can sum up pretty quickly: Let the poor suffer the consequences of the rich.

Young people did not cause this crisis, they should not have to pay for it.

High school students are planning their own press convergence at the capitol this Monday at 4:30pm, spread the word!

Some of the press coverage from today's action: