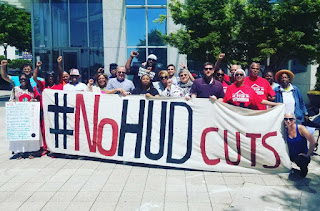 On International Worker’s Day (Tuesday May 1) Housing Justice League members and supporters rallied  outside Senator David Perdue’s office at a main intersection in Buckhead to protest Donald Trump’s proposed cuts to the U.S. Department of Housing and Urban Development (HUD) and demand the senator vote against Trump’s 2019 budget proposal that includes the slashing of HUD programs across the board. The rally was part of a National Day of Action organized by the National Alliance of HUD Tenants (NAHT) of which HJL is a member. The full budget proposal represents a brutal attack on the poor that will only contribute to inequality, racism, and the war economy. According to NAHT, the $6.8 billion in proposed cuts would be the deepest cuts in HUD’s history. Deborah Arnold, a community activist with Housing Justice League and NAHT Vice President commented, “Trump wants to cut taxes for the richest of the rich, paid for by raising rents on the poorest of the poor. 80% of HUD tenant households are led by women. We, too, demand that Congress reject Trump’s vicious assault on the women, children, elderly and disabled people who live in HUD housing.” 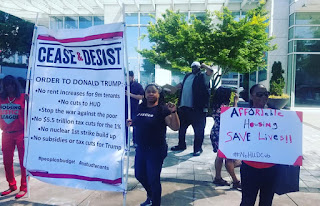 If approved, program cuts would leave even more people in Georgia and across the US at high risk of death, without basic necessities such as housing, food, and health care in order to give tax cuts to corporations and the extremely wealthy. Trump’s cuts would pay for a $1.5 trillion tax cut for the 1% and corporations, huge hikes in the Pentagon budget, including first strike nuclear weapons, and the border Wall. Nationally, the cuts would raise rents on nearly 1.8 million families and 3 million children receiving rental assistance, squeezing even more rent from poor communities caught in discriminatory and exploitative systems including the housing market, education, and criminal justice system. In Georgia, the cuts would affect nearly 60,000 households. Rents would be raised by increasing the share of income that households must pay in rent from 30 to 35 percent, eliminating income deductions for households that have high out-of-pocket expenses (such as childcare), and raising minimum rents for households with little or no income, most with incomes below half of the poverty line.

Trump’s budget proposes to cut 200,000 people from Section 8 Vouchers next year – 10% of the total – and an astounding 37% from Public Housing operating budgets, which are already severely underfunded.  The budget also repeals Section 8 Enhanced Vouchers, which would immediately displace more than 30,000 families and seniors across the nation. 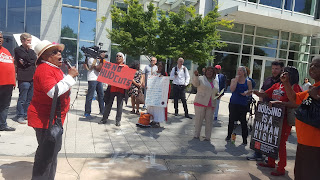 Additionally the plan would give HUD unlimited power to impose additional rent increases, letting it drastically cut rent subsidies for low-income Americans without seeking Congress’ approval. HUD says it aims to encourage work among rental assistance recipients, but key aspects of the plan would, if anything, discourage work, by raising households’ rent to 35 percent of their income, which would increase rents more drastically as earnings rise. The plan includes a proposal to let agencies and certain subsidized housing owners condition rental assistance on work requirements, while the budget proposal simultaneously includes deep cuts to job training programs.

Protesters emphasized that the budget changes will not only affect the most vulnerable people in Georgia, but their entire communities as well. “You can’t address poverty if you don’t address affordable housing. We are in a housing crisis in Atlanta. All we’re doing is increasing homelessness,” commented Karimah Dillard, a student of social work and community advocate. “When I think about the social cost of raising rent, it goes so far beyond whether or not I’m able to make my rent payment. We’re talking about can I eat? Can I afford my medicine? Transportation? If I can’t drive to work, I will lose my job.” 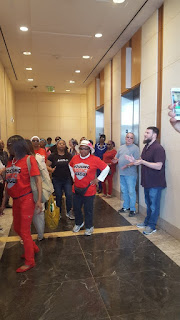 Following the rally, protesters entered the Terminus 100 Building to request a meeting with Senator Perdue. Due to Perdue’s office being located 26 stories up on a “closed floor,” only a small group managed to get into the elevator leading to the correct floor. They were able to hold a brief meeting with Perdue’s State Director, Ben Fry, to explain their concerns and request a meeting at a later date with the Senator. “The government will subsidize corporate America, but it won’t subsidize poor people, or low-income people, or the working class community. Everything that’s being proposed seems to be going against the working lower-class people,” explained Columbus Ward, long-term Peoplestown resident and HJL member. “We want our representatives to understand the negative impact these cuts will have on the people who elected them.” Alison Johnson, another Peoplestown resident and member of HJL added, “all of our public housing has been taken away. Not only are we asking for no HUD cuts, we’re asking for money to be put back into the HUD budget. We can’t afford to live the way we are living today. There is nowhere for us to go. We are here today to ask respectfully that David Perdue listen to the constituents that put him in office. We cannot tolerate or take another HUD cut.”

An attack like this, added to an already severe housing crisis in which over half of renters are paying more than 30% of their income in rent (the definition of affordability), and people of color are being hit the hardest, makes an urgent situation even more dire. Housing Justice League is supporting tenant organizing through regular monthly tenant trainings and ongoing support, in working to build political force among a large renter class that is already shifting political consciousness and power across the United States and internationally. Hul’yah Yasah, a tenant organizer at the HUD-subsidized Briarcliff Apartments commented, “we rise that we may be a voice for the voiceless. We no longer have to look to you to make it right. Our presence is what makes it right.”
Posted by Atlanta Economic Justice Program/AFSC at 7:54 PM